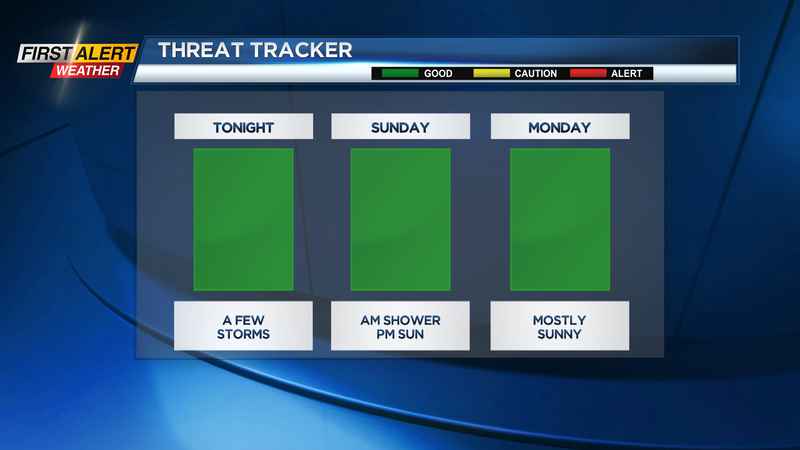 ROCHESTER, N.Y. (WHEC) — A warm front moving through this evening will bring more mugginess to the air once again, as dew points rise through the 60s, along with a few light showers.

A trailing cold front that brought some severe storms to Michigan will approach after midnight, with a few storms here, as well. These storms will weaken as they draw closer, losing daytime instability. That being said, expect a brief downpour, some lightning, and perhaps a gust of wind as they move through after midnight and before sunrise. Most of the rain will clear WNY by Sunday morning, leaving us with just the slight chance of an early shower, mainly in the Finger Lakes and southern Genesee Valley. Humidity will drop during the afternoon, and more sunshine returns, leaving us with a fairly nice Sunday. Highs on Sunday make it into the mid-80s after starting off in the upper 60s.

Next week: we’ll start off the new work week with another mainly dry and seasonably warm day Monday with a mostly sunny sky. A weak cold front will bring another chance for a few later day storms on Tuesday, followed by an isolated shower or storm on Wednesday. Thursday will feature another round of scattered showers and some storms, as a boundary remains nearby, and will serve as the focus for this unsettled weather. So, our wet and stormy July will continue right into the end of the month. There are some signs that a drier pattern may return as we enter into the month of August.