ROCHESTER, N.Y. (WHEC) — We recorded our fourth day of sub-zero temperatures at the Rochester airport Monday morning, and we’re not done.

A clipper that is moving in tonight will drag down another blast of frigid air behind it. Temperatures will drop back through the teens on Tuesday, into the single digits by Wednesday morning. Wednesday and Wednesday night will feature the coldest air this week, with lows dipping below zero for the fifth time since 2022 began. If you’re looking for a January thaw, it likely won’t be occurring this month, but we do see the frigid air easing into February. Temperatures may finally begin to climb above average toward the middle to end of next week. Until then, we’ll have to keep our heavier jackets, gloves and hats handy.

As far as snowfall goes, the clipper zipping by tonight will bring less than an inch or two for most by morning, with most snow tapering to scattered snow showers after midnight. This next blast of Arctic air will bring a renewed chance for some lake effect snow, but accumulations will be limited due to the dry nature of the air. Wayne County and towns north of the city may pick up a few more fluffy inches into Wednesday morning before the snow comes to an end and we see some sun returning.

Watching the coast: Our weather is fairly benign for the rest of the workweek, with some flurries or light snow showers, but little in the way of additional accumulation. One thing we’ll be watching for later this week and into the weekend is the potential for another coastal low.

Right now, the track keeps it far enough to our east, to keep any major accumulations closer to the coast and the big cities. But, we’ll monitor any westward shifts in the track of the storm, which may bring a better chance for snow to parts of our area. Stay tuned. 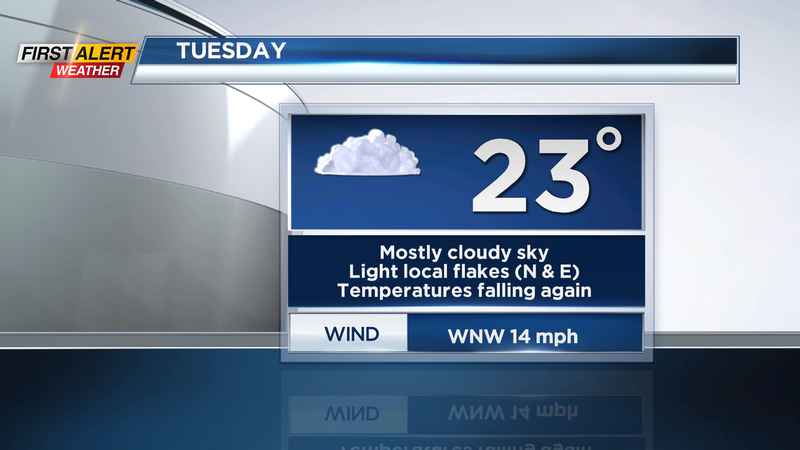