The first clipper moved through Tuesday morning, with off and on snow showers, and little more than a fresh coating of snow. We’ll see a clearing sky tonight as high pressure briefly builds in. Temperatures drop into the teens as the clouds depart.

This means we’ll start off Wednesday with some sun, but that’ll be short-lived. Our next clipper will dive through the Great Lakes, bringing a slight chance of rain/snow showers by the afternoon. This will be followed by another shot of chillier air, which means another round of some lake snow showers Wednesday night into Thursday.

Once again, we’ll see flakes flying, but most will see less than 1" of new snow on Thursday. This will come to an end, with some sun to start Friday, but much like the last clipper, this next one will bring clouds and a rain/snow mix by later Friday. This last clipper to end the week will have a little more energy with it, and a stronger punch of colder air behind it. So, we should make it into the 40s on Friday but drop quickly into the 20s on Saturday with some lake effect snow.

The weekend: We may see an inch or two of snow on Saturday into early Sunday, but again, much of this is just a fresh coating of white on to of what we already have on the ground. The cold air will be the bigger story this weekend, with lows dipping into the single digits Sunday and Monday mornings, and teens for highs on Sunday. 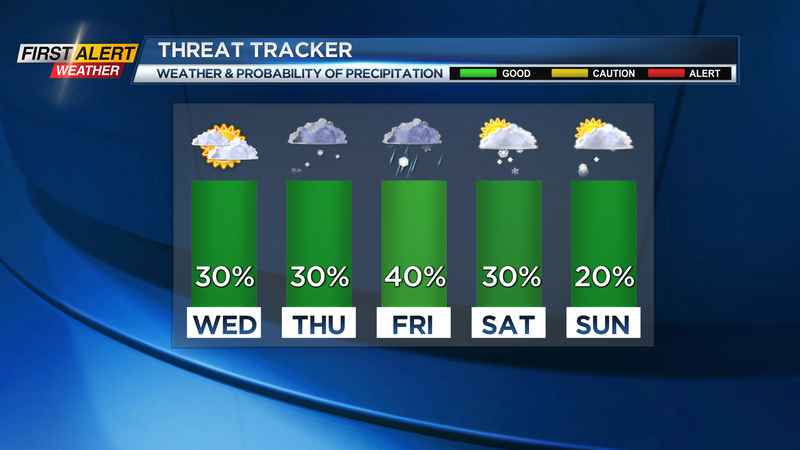 An early look at Valentine’s Day shows a chilly day with highs in the 20s and a few snow showers around. Bottom line: winter sticks around with frequent snow showers, but not much accumulation, and a handful of days well above freezing.