ROCHESTER, N.Y. (WHEC) – We are going to talk directly to the weather geeks.

Today we look at the difference between dew point and relative humidity. The dew point is basically a simple concept. It is the temperature to which the air must be cooled to reach saturation. Here is an example of what this means. If we have a temperature of 60 degrees and we have some water vapor in that air. You can then cool that air down to the dew point of 50 degrees and that is when we get saturation of the air.

Relative humidity is a little more complicated. This is the amount of water vapor that is in the air, as it compares to the amount that is needed to reach saturation. That one you really have to think about! But the important thing to remember is that temperature really plays an important role in this.

If we take a little drop of water, H2O, and we take that droplet of water and we put it into a parcel of air that is only 40 degrees. At that temperature, the air cannot hold very much moisture so relative humidity may only be about 70 percent. Now if we take that same exact water droplet, but this time we put it into an air parcel that is at 60 degrees (20 degrees warmer) the capacity of the air to hold moisture is much greater. So what happens to the relative humidity? It goes down to about 35 percent. So you see the temperature is really an important factor when it comes to relative humidity. Relative humidity is important in measuring the rate of evaporation. It is a percentage or a ratio, whereas the dew point is a constant. No matter what time of the year or what point in the season, dew point is more precise at measuring moisture in the atmosphere. 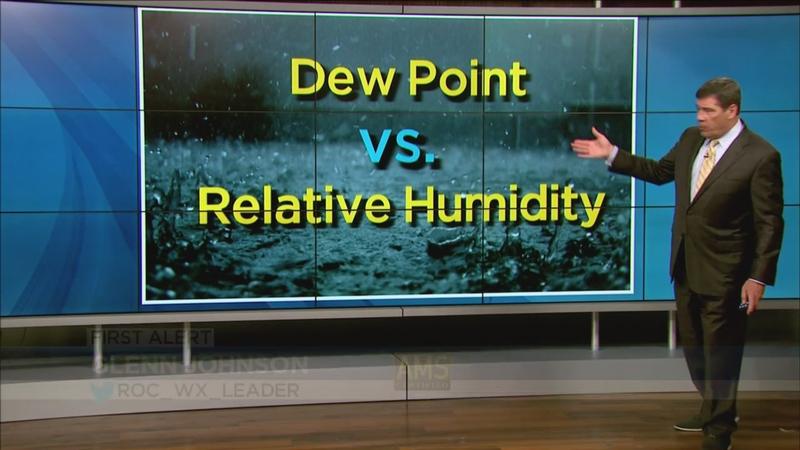 If you are ready, we will have a weather test on this subject a little later.