First Alert Weather In-Depth: Weather and how it affects pollen

ROCHESTER, N.Y. (WHEC) — I do not know about you, but I do suffer from environmental allergies. We know a lot of folks in Western New York have the same sensitivities, so we try to give you an updated report on a regular basis of how the pollen count is progressing in a given season.

As of today, the tree pollen is running at moderate levels, grass pollen is now at a high level and the weed pollen is rather low. This comes in from Dr. Hartel who is with Allergy, Asthma, and Immunology of Rochester. His staff will measure the pollen count and send us that information on a regular basis.

After looking at this for many years we know the pollen comes at a very predictable level throughout the year. To start the season it is tree pollen that is at the highest. About halfway through the season it then switches over to the grasses and eventually we transition to weed pollen. This last transition usually happens later in the season, usually during the month of August.

We know that the weather has a direct connection in terms of the amount of pollen that is in the atmosphere. Believe it or not, “nice” weather can be bad for us. If we have lots of sunshine, it is windy or a very dry atmosphere the overall pollen level can be rather high. You can often see the pollen in the air when the angle of the sun is low in the sky.

On the other hand, rainfall can be a positive ingredient as it actually has a cleansing effect on the atmosphere. It should be noted that this is a short-term fix before the pollen starts to pick up once again. 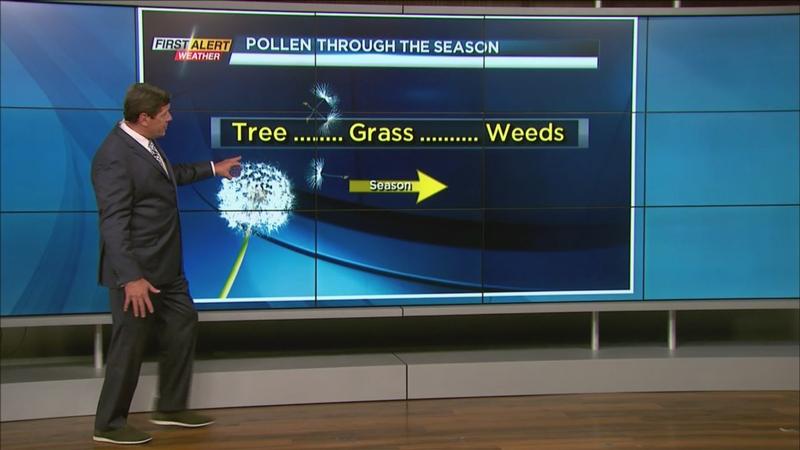 We do have some rain that is showing up on the News 10 First Alert Doppler Radar and that will certainly have an impact on diminishing the pollen level over the next 24 hours.

Before that rain arrives, maybe you need a few tissues?