First Alert Weather In-Depth: What is the Jet Stream?

ROCHESTER, N.Y. (WHEC) — We are talking about the jet stream today. We use the terminology on a regular basis and we can throw it around pretty easily, but what is the Jet Stream? The way to think about the jet is that it’s a river of fast-moving air located in the upper atmosphere.

What causes the Jet Stream? The answer is the global temperature. We know that across the globe we get lots of incoming solar radiation and the strongest radiation right at the equator. But when we reach into the higher latitudes the temperature is much colder. As a result, we have a significant temperature difference. It is at that point, where there is the greatest temperature differential, that is where we the formation of the jet stream is found.

To be specific, we have all kinds of jet streams. There is the polar jet or it could be the subtropical jet, but we know these fast-moving rivers of air have a direct impact on our weather. You may say I have no idea what you’re talking about. But if you have ever been in a plane going from west to east or east to west are you have probably experienced the influence of the Jet Stream. At least in terms of your arrival time.

As I mentioned, the jets stream is located in the upper atmosphere between 5 to 9 miles above the surface of the earth. Speeds can range anywhere from 110 to 250 mph. The difference in the wind speed will be higher in the winter because that’s where we have the greatest temperature contrast. In addition, many of our storm systems ride right along that jet stream and that’s obviously a big influence on our weather.

This is a look at the Jet Stream and the upper-level winds for today. We are on the cold side of the weather pattern. Looking ahead, there is going to be a significant change in this weather pattern as we go through the next couple of days—particularly on Thursday. We are talking about some warmer weather and some would say it will be back to spring! 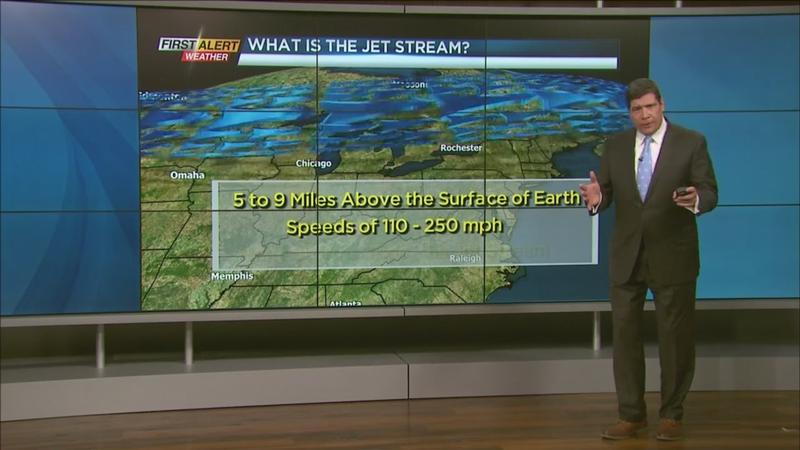