First Alert Weather: The worst is over for wind

In addition, we broke a long-standing high-temperature record for this date. The old record was 70 degrees set back in 1894. This 128-year-old record has been around since Grover Cleveland was president of the United States. Unofficially, the high-temperature today was 73 degrees and the last time we got this warm in Rochester was over four months ago.

Although there will still be some gusty winds this evening, conditions will slowly improve overnight. A cold front will move across the eastern great lakes, including Rochester. This will effectively end the gusty winds, but the temperature will fall into the middle 30s by Monday morning. A low-pressure system will move up along the cold front for Monday spreading a cold, steady rain into Western New York. Rainfall could be near a half-inch to an inch, especially south of Rochester by the end of the day. As a result, watch for ponding on area roads with area creeks and streams rising over the next 24 hours. However, at this time, no significant flooding is expected. The temperature for Monday will remain within a few degrees of 40.

The temperature is expected to fall through the 30s Sunday night which will change the rain to wet snow. Any accumulation by Tuesday morning will be limited to just an inch or two. Tuesday any flurries or snow showers will end early with breaks of sunshine. Expect a gusty wind and the temperature only in the middle 30s. A ridge of high pressure will build across the northeast for the middle of the week bringing a return to fair skies for Wednesday and Thursday. Look for a return to sunshine and a temperature moderating into the middle 40s. 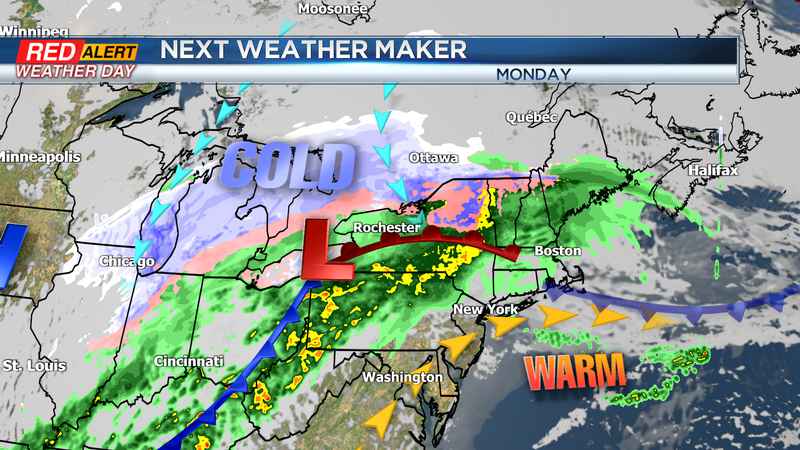 Stay tuned to News10NBC for the latest updates on the forecast.