ROCHESTER, N.Y. (WHEC) — Western New York will look and feel more like mid-winter over the next few days.

This is due to a deep atmospheric trough anchored across the Great Lakes and the New England states over the next few days. This will bring unseasonably cold weather which will include gusty winds and a late-season snowfall. At times, it will feel more like early February during the next 48 hours.

A series of cold fronts will pass across the area for tonight and early Sunday. As the temperature falls this evening, any remaining rain showers will change to snow showers. Snow accumulation should be limited to less than an inch for most of the Rochester area, but southwest into Wyoming County snowfall will be greater with 2 to 4 inches in the most persistent snow. Much of this is due to the colder temperatures at the higher elevations and a greater concentration of lake effect snow. As a result, there is a winter storm warning for Wyoming County until Monday morning (this does not include Rochester).

Very cold temperatures in concert will gusty winds and occasional snow will no doubt finish up the weekend. Sunday you can expect more snow showers with most of the area seeing less than an inch of new snow and most of that accumulation will be focused on grassy areas. But once again, Wyoming County will measure another 2 to 4 inches of snow. We expect the temperature will never get above freezing with most of the day spent in the 20s. This will mean that the temperature will be running some 20 degrees below normal for this time of the year!

Sunday night will not be much better with the very cold northwest flow continuing for Western New York. More snow showers will be likely with additional accumulation expected. Look for gusty winds to continue and the temperature falling into the upper teens by Monday morning. Finally, the flurries and snow showers will end early on Monday, but the chill will continue with the temperature only in the upper 20s. 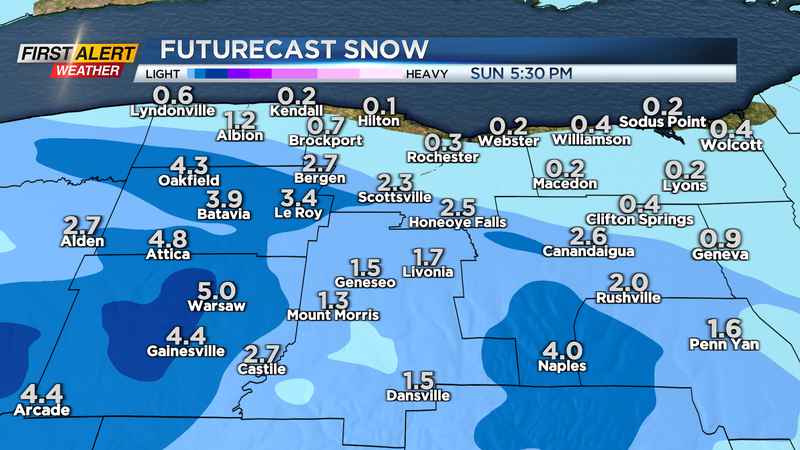 Looks like more seasonable and more reasonable temperatures will start to return by later Tuesday and Wednesday.

The News10NBC First Alert meteorologists expect the temperature to be milder with readings back into the middle 30s on Tuesday and lower 40s by Wednesday. And if we are fortunate enough, we could even find the mercury warming to near 60 degrees by Thursday.

Stay tuned to News10NBC for updates on the weather forecast.