SWEDEN, N.Y. (WHEC) – A driver became trapped in a burning car after crashing into a tree along Salmon Creek Road in the Town of Sweden on Wednesday but a group of first responders worked quickly to keep the flames at bay and likely saved his life.

Around 11:30 a.m. on Wednesday, a 911 call came in for a car that crashed into a tree along Salmon Creek Road. Monroe County Sheriff’s Deputy James Shaw was in the area and raced to the scene.

“I pull up, I see that flames are already rolling pretty good, probably almost twice as high as the vehicle, it was coming from the engine compartment,” he recalls.

Deputy Shaw’s first thought was to get the driver out so he and an Ogden Police Officer rushed to the burning car.

“The door was jammed, unable to be opened, he began trying to smash the window but the man was stuck in there, we were trying everything we could to get the vehicle open to get him out.” 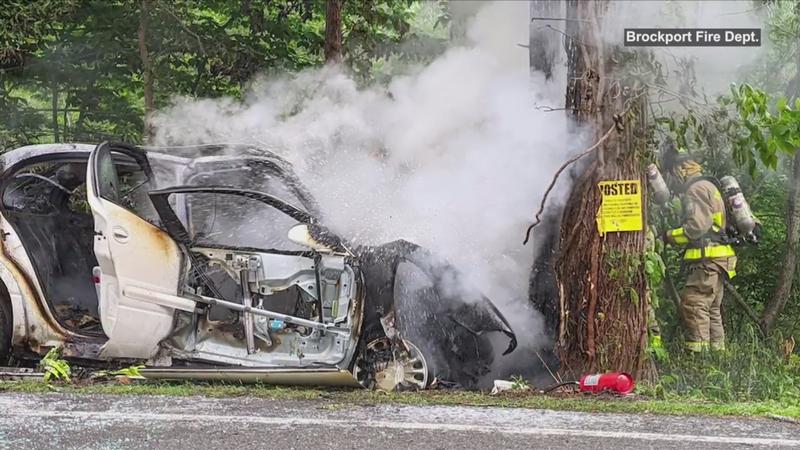 They couldn’t free the man from the car so they ran to their patrol cars to retrieve fire extinguishers. By then, a few other deputies and the Ogden Police Chief had arrived. They all circled the car, using fire extinguishers and when those ran out, they ran to a neighbor’s house to get more. When Monroe Ambulance arrived on the scene, an EMT also used a fire extinguisher from the rig to try and help.

By then, Jose Medina, the Chief of the Brockport Fire Department had arrived.

“It was fight or flight, we got a job to do, I start looking around thinking about what my plan of attack was going to be for our crews,” he recalls. But before he could give it much thought, he went for the man who was trapped.

“Went in through the back door…myself and one of the officers and we were able to just get him out with just brute force,” he tells News10NBC.

After the man was pulled from the car, he said, “you can see the flames just rolling through the passenger compartment of that car, so they got him out of there literally with seconds to spare,” explains Ogden Chief Chris Mears.

Helmet camera footage from a responding Brockport firefighter who arrived just after the man was pulled from the car shows raging flames that seem to just keep reigniting.

“It took roughly a half an hour to 45 minutes to extinguish the fire just due to fuel leaking into the ground and then burning off as quick as he would knock it down and flare back up,” Medina explains. "The empty canisters scattered around the car and the men and women who used them were likely the difference between life and death for the driver, “there were so many officers to respond that just happened to be in the area, we used every last one of the extinguishers they had and I had and anybody else that was on scene,” says Medina.

For Deputy Shaw, it felt like the incident lasted forever.

"I realized that it had been only over six minutes from the time I arrived on the scene until he was extricated and in the ambulance.”

A 6-minute team effort that saved a man’s life.

“To put yourself into a burning car, not knowing at any moment what could happen…could be an explosion, anything could happen and they just, they went the distance and did what needed to be done and saved the patient, it’s just heroic,” Chief Mears says. “Normally, if there’s a person trapped in a car that’s engulfed, by the time first responders get there, it’s usually it’s too late. So, this is really, it’s almost a miracle.”

The man was transported to Strong Memorial Hospital where he remains in guarded condition.