ROCHESTER, N.Y. (WHEC) – Thousands of flights were canceled and delayed over the weekend, which included the busiest air travel day of the year on Friday, according to the TSA.

FlightAware’s flight-tracking website indicated that more than 6,300 flights were delayed within, into or leaving the U.S. on Saturday, and 859 flights were canceled.

Chris Thompson of Rochester had big weekend plans, a trip to Las Vegas. “I had about a two-hour delay here at the Rochester Airport and then it was a 24-hour delay like the flight actually got canceled when we got to Philly for a connecting flight so we had to spend a night in Philadelphia,” he tells News10NBC. “No shade to Philly but you know I wanted to go to Vegas!”

Eventually, Thompson got to Vegas but it was no small task. “It was just chaos like everywhere, the lines were out the door, the lines were all the way to security for people just trying to rebook their flights,” he says.

“I call it a flightmare, a flightmare really,” says Lynn DiMaria, who owns DiMaria Travel in Brighton. “This has been going on since January.” 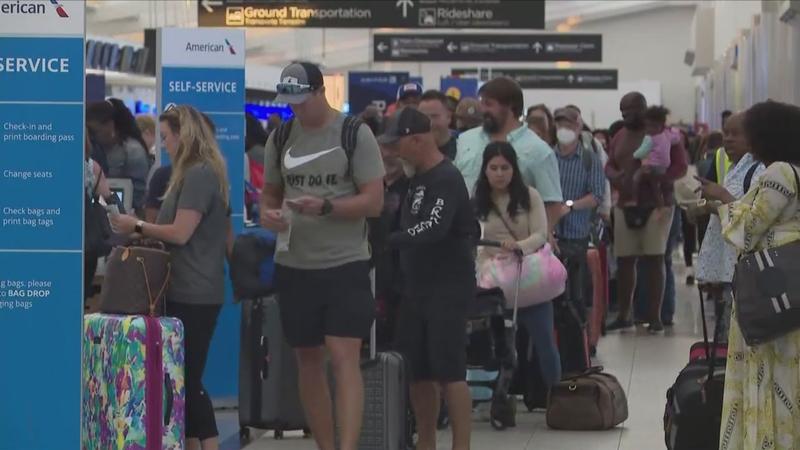 Airlines can’t keep up with a surging demand because of a pilot shortage and then, of course, there’s been some wild weather in the mix.

“The real issue is that once one gets canceled, all the other ones are taken because there are not enough flights. They’ve never been able to put the capacity back in the air because they don’t have, they don’t have the help,” DiMaria says.

If you haven’t considered it in the past, now might be the time to opt for travel insurance if you’ve got a lot of money invested into a trip.

“The cost really depends on the cost of the trip, it’s usually somewhere between 3% and 5% of the trip,” DiMaria explains. The travel insurance she uses charges per person and for every two adults covered. Two children under 17 are free.

One of DiMaria’s clients recently had to use travel insurance after a flight cancellation delayed his trip to Jamaica. “This couple lost one day of a pre-paid non-refundable vacation, they’re getting back $700 because that’s what it cost for the day they lost,” she says.

DiMaria’s other advice? Book early morning flights, it gives you more time to rebook the same day if needed. “A lot of times they’re canceling them the morning of…but keep checking your flights stay on top of it,” she says.

Thompson eventually made it to his destination when asked whether he had a good time, “I can’t talk about it, I was in Vegas but yeah I had a great time,” he said with a smile.