ROCHESTER, N.Y. (WHEC) – Organizers of the Rochester Fringe Festival announced on Monday that the eleventh annual festival will include more than 500 performances and events, ranging from comedy, dance, kids’ fringe, and multidisciplinary shows, to music, spoken word, theater, and visual art & film. The festival runs from Tuesday, September 13 – Saturday, September 24.

“We are absolutely thrilled to be able to offer such a diverse array of shows this year,” says Rochester Fringe Festival Producer Erica Fee. “The energy felt throughout the city during the 12 days of Fringe is truly incomparable!”

The Spiegeltent and its adjacent Spiegelgarden will return to One Fringe Place (corner of Main and Gibbs Streets, across from Eastman Theatre). The announcement reveals that a new variety show created and directed by Fringe favorite Matt Morgan and starring Matt Morgan and Heidi Brucker Morgan will make its World Premiere in that venue for 13 performances: Cirque du Fringe: Afterglow. The production will feature the Morgans in their first partnered return to Fringe since 2019 and features an all-new cast.

“I’m so excited to get back to my home away from home, the epic Rochester Fringe,” says Brucker Morgan. “We will finally be reunited… and it feels so good.” 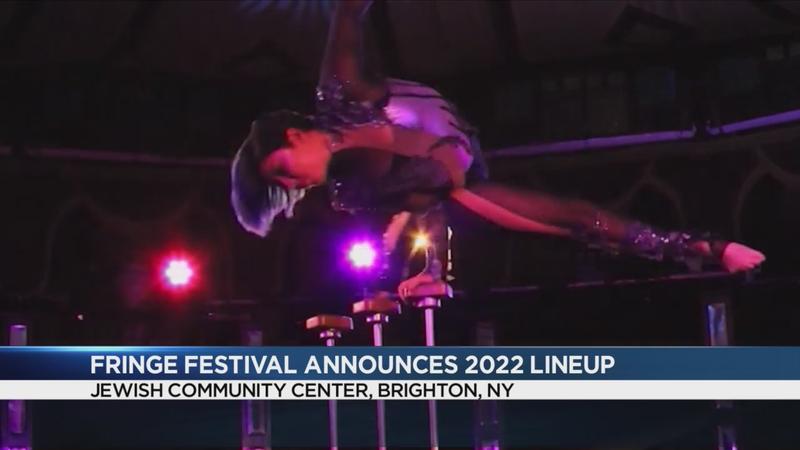 Friday & Saturday on the Fringe ft. The Flying Españas in Flippin Metal Circus on Sept. 16 – 17 at 7:30 – 9:30 pm. at Parcel 5, free
Welcome to the Thunderdome! Experience the fifth generation of The Flying Españas in an adrenaline-pumping world premiere that fuses feats of daring with death-defying acrobatics and heavy metal. Be awed by the flying trapeze, hear the roar of the massive motorcycle highwire overhead, and witness the epic Wheel of Destiny, all set to a live soundtrack from NYC-based band Mountain Girl.

Fringe Finale Weekend ft. BANDALOOP on Sept. 23 – 24 at 7:30 – 9:30 p.m. at Martin Luther King, Jr. Park, free
To further its commitment to providing incredible arts experiences in public spaces, the Fringe announces the return of vertical performers BANDALOOP, who will use climbing technology to dance on the side of 21-story Five Star Plaza at 100 Chestnut Street as crowds watch from Martin Luther King, Jr. Park. California-based BANDALOOP was a massive hit at Fringe in 2012 and 2013, attracting tens of thousands. From the Seattle Space Needle and the New York Stock Exchange to Yosemite’s El Capitan, BANDALOOP honors nature, community, and the human spirit as they re-imagine dance, activate public spaces, and inspire wonder and imagination in audiences around the world.

Fringe Street Beat on Sept. 24 at Prelims: 5-7:30 p.m., Finals: 8-9:30 p.m.at Martin Luther King, Jr. Park, free
The annual all-styles dance and breakdancing competition will feature teams from all over the Northeast competing for a cash prize, with nationally known judges and DJ ha-MEEN. The finals will take place in the “bowl” at MLK between the two performances of BANDALOOP.

The annual sell-out Silent Disco, which the festival introduced to Rochester in 2013, returns for four late weekend nights (Sept. 16, 17, 23, 24) in the Spiegeltent.

All tickets go on sale online Monday and in person at the door of the venue or (beginning September 13) at the One Fringe Place Box Office, corner of Main & Gibbs.

(Note: additional headline programming will be announced in the next few weeks.)

The 2022 festival will also feature more than 125 FREE shows during its 12 days.

The annual, free Kids Day will take place on Saturday, September 24 in the Spiegelgarden, which is also home to the Theatre Bar, food trucks, games, restrooms, box office; and at The Strong National Museum of Play, where attendees can take part in a Guinness World Record Attempt for Largest Juggling Lesson at 12 p.m. Additionally, a brand-new Dashboard Dramas VIII (four short plays in four parked cars) will return, along with the debut of Bushwhacked British Bake Off: Game of Scones, an improvised take on The Great British Baking Show; and Bushwhacked Bridgerfun Ball, a Bridgerton spoof.