Geneva comes together to help WWII veteran whose car was stolen

GENEVA, N.Y. (WHEC) — He fought in World War II then came home and worked various jobs until he retired about 30 years ago. Sunday afternoon his car was stolen. News10NBC met this local veteran and found out how the Geneva community is coming together to help him out.

Samuel Ferugia is not only a proud veteran, he’s independent, and still going strong as he reaches another milestone in a few days.

At the age of 95, Ferugia still gets out of the house every day and heads to Water Street Cafe in Geneva. It’s his favorite place for breakfast. Ferugia even has his own reserved seats at the counter. It’s one of the many reasons why he still owns and drives a car.

"I’m a very careful driver. I’m not a speedster, or anything like that. I drive the limit unless I’m passing somebody," Ferugia said.

After enjoying some breakfast at the cafe, Ferugia headed to Baroody’s Smoke Shop, less than a 2-minute drive away. He parked his 2003 Chevy Cavalier next to the back door and walked in to get some lottery tickets. During a momentary lapse in judgment, he left his keys in the car. 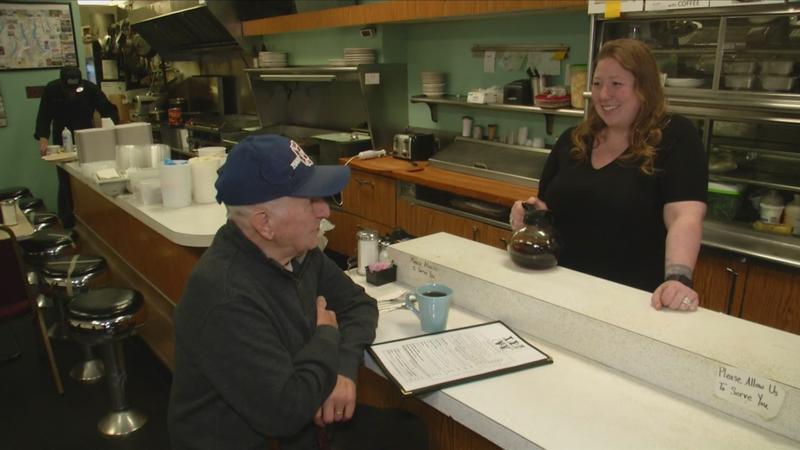 Samuel Ferugia inside the Water Street Cafe in Geneva, NY on Feb. 1, 2022.

"Went in got my tickets, came right back out. I see my car going away from the door," Ferugia said.

His car didn’t contain much except for some tools and a leaf blower in the trunk.

"Wasn’t nobody in the car getting hurt, or getting caught in there," Ferugia said. "So I just took it as it is. If they find the car fine. If they don’t I’ll get along without it."

Ferugia turns 96 on Feb. 10. He joined the Army at the age of 18 in 1944 and served in the Armored Infantry under General George S. Patton.

"Well, I got to see a lot of Europe. My combat time was towards the end, and Germany surrendered," Ferugia said.

Thirty years ago, Ferugia retired from the working world, living with his wife of 75 years until she died. The car helped him lead an independent lifestyle. Through a GoFundMe page, Water Street Cafe’s Teresa Cerino says the community is chipping in to help him buy a new car as soon as possible.

"All the things that he does at 95 years young is super important for him to have his independence, and everybody feels that that’s his lifeline. His car, and for it to be taken from him it was awful. We had to do something to help him out," Cerino said.

Ferugia did file a stolen vehicle report with Geneva Police. Although his car was insured, if found, he says he would only receive a tiny portion of what it’s currently worth, because he did leave his keys in the car.