Good Question: Should Sheriff Baxter be in a dealership’s commercial?

ROCHESTER, N.Y. (WHEC) — Todd Baxter is Monroe County’s Sheriff. We see him quite a bit at news conferences, giving updates on different cases, and then recently in commercials for a car dealership. You asked News10NBC’s Brennan Somers, is this legal?

This ad in particular is one of three commercials featuring a racing team and its Volkswagen Beetle. The team used it to compete in the Baja 1000 last fall. Baxter is on the team.

The ads are for Ide Volkswagen. The dealership has a decal on the car and cars don’t race if you don’t have sponsors.

Is there anything wrong with this situation?

A viewer named Martin asked Somers: I would think that even if it doesn’t violate his impartiality of his position, it would seem to be unethical. Is it legal for an elected sheriff to personally endorse a private business? Seems odd to me.

SOMERS: What would you say to that, first?

You hear the sheriff there. He gets the issue after the fact, but what about before?

BAXTER: Before doing the ad we spent some time here make sure we (MCSO) don’t have contracts with Ide, make sure we don’t have business with the dealership, and on the other side, I received zero money, zero dollars. This was more for fun, F-U-N, to build up interest in the Baja race.

In the ads, Baxter barely says anything. There’s no uniform or reference to what he does during his day job.

Still, he’s an elected official in an ad for a private company.

Somers went to the Empire Center for Public Policy to hear from its legal experts. The think tank acts as a government watchdog. This type of stuff is right in their wheelhouse.

They told Somers there’s nothing here.

Baxter’s been on the race team for years. The team does actually compete and the sheriff for the most part in the ads is just standing there.

There is a section of Monroe County’s Code of Ethics that covers "course of conduct", but again, Somers was told this isn’t close to a violation.

The Ethics Board told Somers there’s been no formal complaint.

If there’s nothing legally wrong, just bad optics to some, would he do it again?

BAXTER: It wasn’t done to do anything than raise the stature of the race and have some fun. With that being said, the appearance is there so we’ll put that in the back of our mindset, keep track of that, and don’t do that type of stuff in the future.

As for getting out there, Baxter goes every year. He wanted to make it clear that flights, food, etc… what he needs is all coming out of his pocket and NOT taxpayer funds.

Sheriff Baxter statement on Baja 1000 by News10NBC on Scribd 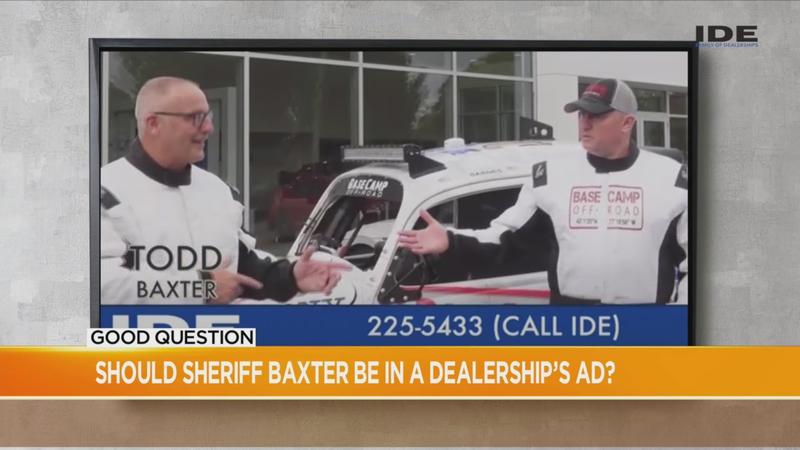