GREECE, N.Y. (WHEC) — The Greece Central School District board meeting Tuesday night was different from what we’ve seen in other districts this month.

Parents sat silently as school officials laid out opening plans for the fall.

Greece School Board meeting just started- they will discuss opening plans. no public comment tonight – max capacity inside. You can see “no mask” signs. I’ll have more at 11 on how the district feels following Governor Kathy Hochul’s announcement @news10nbc pic.twitter.com/ofF7zSGAWd

District officials discussed new mandates that Gov. Kathy Hochul is putting in place, but with all the work they put into opening plans, they say the state intervening at this point is frustrating.

"It’s frustrating because here you see a completed opening plan, and we’ve tried to think through every detail and now the state may issue something else,” said Greece Central School District Superintendent Kathy Graupman said.

Districts will have to adapt their opening guidance, as Hochul announced Tuesday that all school personnel must get vaccinated or get frequent COVID-19 tests. Masking is also required for anyone entering schools.

"I think that each community should be able to look at the factors in their communities and make their decisions, not one size fits all for the state and that is where our frustration is,” said Greece Board of Education President Sean McCabe. 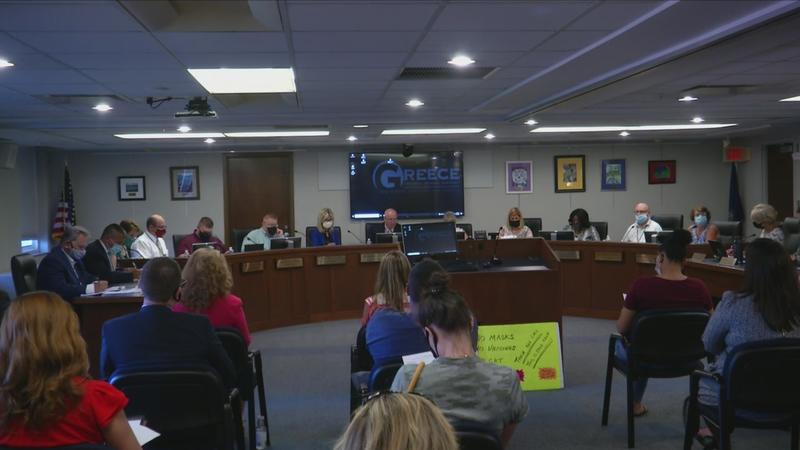 While that frustration lingers, the Greece school district says on a positive note, fall sports will be back and there will be no capacity limit for spectators as long as everyone masks up. They added that right now, 80% of the district’s staff and 50% of students 12 and older have been vaccinated. A lot of board members had questions about the vaccination mandate, as well as the Rochester Teachers Association President.

As of now- GCSD officials say in the district, staff is 80% vaccinated and students 12 and up are 50% vaccinated

"She said for now, which kind of gives us a hint that it may change in the future, we don’t know but for now I think it is a reasonable position to take,” said Rochester Teachers Association President Adam Urbanski.

McCabe added that they will do whatever it takes to keep students in class five days a week. There are too many factors in play and they also want families to understand that they have to play by the rules.

"President Biden made it clear that if we go against the governor on any type of mask mandate he will pull federal funding so I can’t take that risk to lose millions in federal funding that fund several of our programs," McCabe said.

During her first press conference as governor Tuesday, Hochul said more guidance for schools should be out later this week.