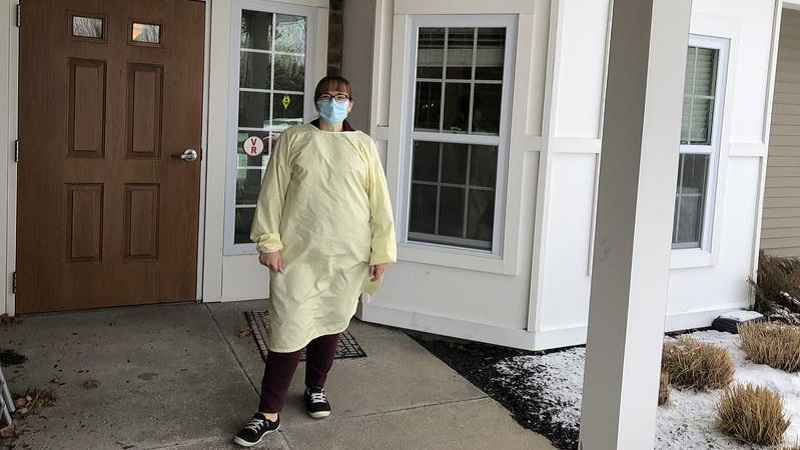 ROCHESTER, N.Y. (WBFO) — COVID-19 has killed over 13,000 nursing home residents in New York state alone, and about a third of all U.S. COVID deaths have been linked to skilled nursing facilities. But a group of small nursing homes, including a facility near Rochester, have fared better against the virus than their larger, more traditional counterparts.

(This is the first in a two-part series examining the Green House Project as a potential solution to the long-term care crisis. A second part, focused on whether the model is financially replicable, is available here.)

Like anyone with a parent in a nursing home, the pandemic hasn’t been easy for Mare Millow.

Her once spontaneous visits to her 80-year-old mother’s nursing home are now prohibited. She analyzes her mother’s wellbeing through the photos that staff send her.

But, unlike hundreds of thousands of others with a loved one in a nursing home, Millow hasn’t had to endure receiving that call — the call telling her that her mother, or any resident near her, has tested positive for COVID-19.

“I’ve never felt that she’s not safe,” Millow said. “Or that I have to worry about her in ways other than you would worry about any elderly parent.”

Her mother’s nursing home, which is part of St. John’s skilled nursing campus in Fairport, about 10 miles east of Rochester, hasn’t had a single resident test positive and only eight staff members test positive during the pandemic.

This nursing home campus, St. John’s Penfield Homes, which consist of two neighboring residential homes with just 10 beds each, is part of the Green House Project, a national network of small nursing homes that have managed to mostly keep the coronavirus in check.

“Everything that I know about good infection control, I believe was inherently built within this model,” said Green House Project Senior Director Susan Ryan.

What is a Green House home?

The Green House Project is a nonprofit organization based in Maryland. Facilities accepted into the network pay a fee for 30 months to receive technical assistance.

The network model was created by geriatrician Dr. Bill Thomas in 2001. The first homes opened in Mississippi in 2003, and nearly 300 homes have since joined the network.

Thomas’ goal was to make nursing homes more home-like and less institutional. As such, Green House homes typically only serve 10 to 12 residents.

Studies have shown this helps residents get 23 to 31 more minutes of direct care time each day than residents in larger, traditional nursing homes. Green House residents also have been shown to maintain their self-care abilities longer, and be less likely to experience depression and suffer from pressure ulcers.

During the pandemic, Green House homes’ small sizes have also given the virus less opportunity to spread.

“My hunch, my overwhelming hunch and belief was that I think [Green House homes are] going to do really well,” Ryan said.

Researchers at the University of North Carolina at Chapel Hill, in a study published last month in the Journal of the American Medical Directors Association, found Green House homes not only had lower COVID rates than larger nursing homes, but also lower rates than other small nursing homes with fewer than 50 beds.

One thing that sets Green House homes apart from other small nursing homes, the study says, is that every resident gets their own private bedroom and bathroom.

“The fact that people aren’t sharing those types of spaces is beneficial in and of itself,” said Dr. Sheryl Zimmerman, a co-author of the study and director of aging research in UNC’s School of Social Work.

The private spaces were especially valuable, considering that some nursing homes struggled to separate COVID-positive residents and COVID-negative residents, increasing the chance the virus could spread amongst roommates.

A nursing home’s COVID rates are partially impacted by the spread of the disease in its surrounding community. For that reason, Zimmerman and other researchers compared each Green House home with the traditional nursing homes in its geographic region. Even still, the Green House homes did better.

“Different states and different regions have had different outbreaks so this study pretty much adjusts for all of those differences and that really is critically important,” Zimmerman said. “We are comparing apples to apples.”

Still, Green House homes face the same problem all nursing homes face: staff who leave the facility and go out in the community.

A July report by the New York State Department of Health found that staff inadvertently brought the virus into New York nursing homes at the start of the pandemic. That’s likely still the major source of COVID in nursing homes today.

At Millow’s mother’s Green House nursing home, Polly Boland is the nurse leader guide. Boland said staff there have been mindful of washing their hands, changing equipment and disinfecting surfaces.

“Just being protective, like you would do at your own house,” she said.

Boland oversees a team of what in Green House homes are called Shahbazim. They’re certified nursing assistants who, in addition to their nursing duties, perform housekeeping duties like cooking, cleaning and doing laundry.

“So we were able to clean everything and we’re able to really have a sense of ownership of it,” Boland said.

This universal worker model also means fewer ancillary cooking and cleaning staff coming into the homes, which the UNC study says may have helped Green House homes reduce the risk of COVID getting into their buildings.

The study also found that Green House homes typically pay certified nursing assistants more than traditional nursing homes do, so staff may not have to work second or third jobs in other facilities.

“Which, of course, is very common within this field,” Zimmerman said, “and we know that that’s where there’s been risk, is that people go from one job to another job and then they bring more of the infection back in from one setting to another setting.”

Zimmerman said it’s also possible that Green House staff were especially cautious in their personal lives because of the close relationships they’re able to form with residents.

“They knew they were coming back to these people who they knew so well and cared about so well,” she said.

Green House residents sick with COVID may have survived more often because they have a better psychosocial well-being, the study found, due to better relationships with their caregivers and easier access to outdoor visits with family.

But, the study says the mortality rate may also have been lower simply because Green House homes have a less at-risk population than the average nursing home. They have fewer residents who are bedfast and on catheters, and fewer Black residents, who have a higher mortality risk and have been disproportionately impacted by COVID.

“Again, you’re seeing a bit less of a medically at-risk population,” Zimmerman said. “Now, we don’t know whether that could relate to why the mortality was less, but we certainly would have to better understand it to see what the possible causal link was in that.”

Still, the study called Green House homes a “promising model” to consider as nursing homes are potentially re-invented in a post-pandemic world.

Millow said she wishes everyone could experience what her mother, Kim, has experienced at her Green House home: a private room that overlooks a courtyard, a staff that keeps her engaged and, for now, less fear of COVID.