ROCHESTER, N.Y. (WHEC) — New York State Republicans are challenging the constitutionality of a New York State Department of Health (DOH) regulation that establishes isolation and quarantine procedures for those who are suspected of having a communicable disease.

The rule at the center of the lawsuit is 10 NYCRR 2.13, an emergency regulation that was adopted on Feb. 22 and is due to expire on April 22, though the DOH’s Health Planning Council was set to renew the emergency rule Tuesday.

The Republican lawmakers behind the suit are criticizing the rule for resembling the controversial Assembly Bill 416, which was originally introduced years prior to the COVID-19 pandemic, but its re-introduction in the "COVID era" led to concern on social media that the bill could lead to "COVID concentration camps".

RELATED: Fact Check: Is a bill that could lead to COVID ‘concentration camps’ up for a vote? 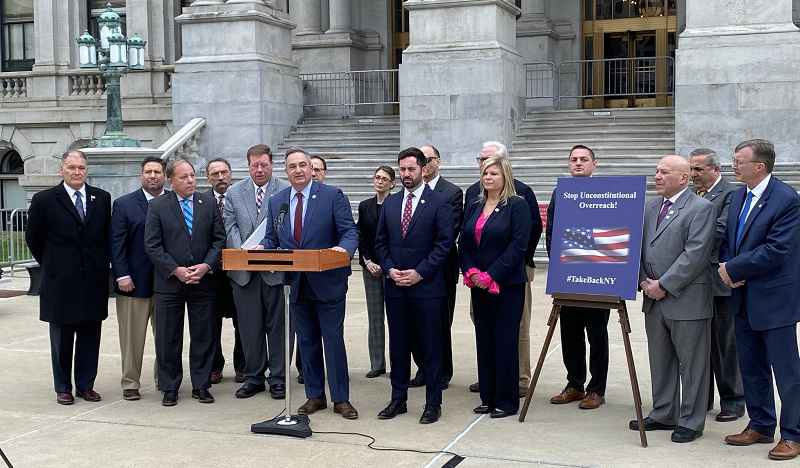 The downstate assemblyman who proposed the bill in this session, Nick Perry (D, 58), ended up striking the bill after News10NBC’s Nikki Rudd contacted his office about the bill and the online controversy it was causing.

The lawyer representing the lawmakers said Section 2.13 is "a law cloaked as a ‘regulation’". The suit claims the DOH violated the New York State Constitution in adopting Section 2.13 and is seeking a preliminary and permanent injunction.

State Sen. George Borrello (R, 57), who is one of the Republican lawmakers behind the suit, notes Section 2.13 would allow the Health Department to coordinate with a local health authority to mandate isolation and quarantine for individuals exposed to communicable diseases, even in locations that aren’t their homes.

“The fact that Assembly Bill 416 never received the support it needed to move forward is clear evidence that the legislature has no intent to allow such an unconstitutional edict to become law,” Borrello said.

Bc of the concerns voiced by NYers on A416, the no-due-process quarantine bill, it never moved. @GovKathyHochul put the same provisions in a DOH ’emergency’ regulation. This is a violation of the separation of powers and the will of the people. https://t.co/vWzrzuFL5n

The full lawsuit is below (mobile users, click here):