ROCHESTER, N.Y. (WHEC) — Bill McDonald spent four years of his life serving in the U.S. Navy in the Vietnam War from 1969 to 1973. He served as a third-class gunner’s mate aboard the U.S.S. Aeolus before an accident cut his time in the Navy short.

"I had a shipboard accident, and that left me in the condition I’m in now,” McDonald said. “I almost lost my leg from the knee down because of the accident."

About a year ago, he applied to receive an Action Track Chair – a specially designed mobility chair that allows the user to navigate hills, sand, and rough outdoor terrain. As a hunter and a lover of the outdoors, McDonald was thrilled to get his new decked-out chair on Independence Day.

"Today is just… with the chair coming, it’s just… an added plus, you know?” McDonald said. “It’s gonna make my day. I’m gonna be able to get out hunting again."

The chair came from a North Carolina-based organization called The Independence Fund. According to the group’s website, its mission is to “provide resources and tools that enable veterans to regain their independence, and fight for their ability to sustain it.” 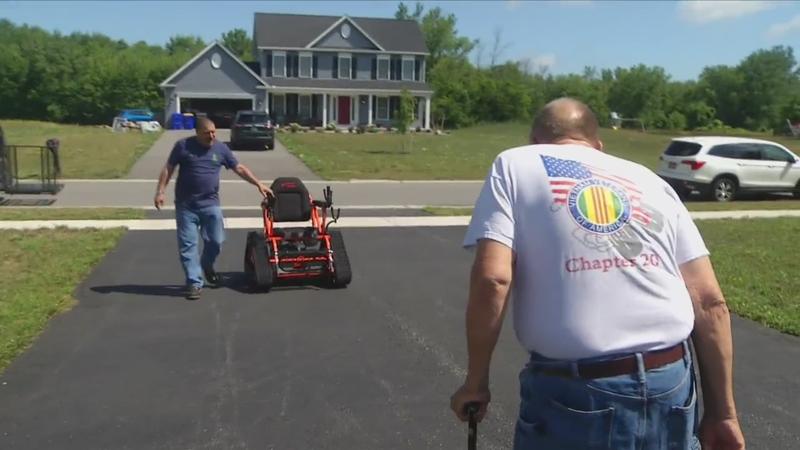 "Back in 2007, we just set out to help some of these veterans regain some of that independence by simply providing a modality for them to get into some sort of independent life, and we did so with these track wheelchairs," Johnson said. “It’s kind of amazing to see what it does, just to give that little piece back so folks can get around a little easier.”

Another organization called Outdoor Accessibility helped to deliver the chair from The Independence Fund in North Carolina to McDonald’s home in Hilton.

The Fourth of July is all about celebrating freedom, and with this new chair, that’s exactly what McDonald will get.

"I could go anywhere I want to, and do what I want to, basically. It’s giving me a lot more freedom," McDonald said.