ROCHESTER, N.Y. (WHEC) — Gov. Kathy Hochul Tuesday announced she is immediately directing the New York State Department of Health to require universal masking in New York’s schools, and that she will work on requiring vaccination or COVID-19 testing for school staff.

She said that the vaccine or testing requirement is "at least for now", and the mask requirement would be for anyone entering a school.

Here is Gov. Hochul on vaccine requirement for school staff with an option to test weekly "at least for now" and universal masking entering a school. @news10nbc pic.twitter.com/SDpmxJaWfp

She made the announcement during her first press conference as governor of New York and said more school guidance should be out later this week but did not give a specific date.

Getting children back to school is one of her three day one priorities. The other two are increasing the vaccination rate and starting the booster shot rollout.

"When I consulted with Dr. Fauci last week, we discussed the urgent need to ensure vaccinated individuals receive a booster dose at eight months," Hochul said. 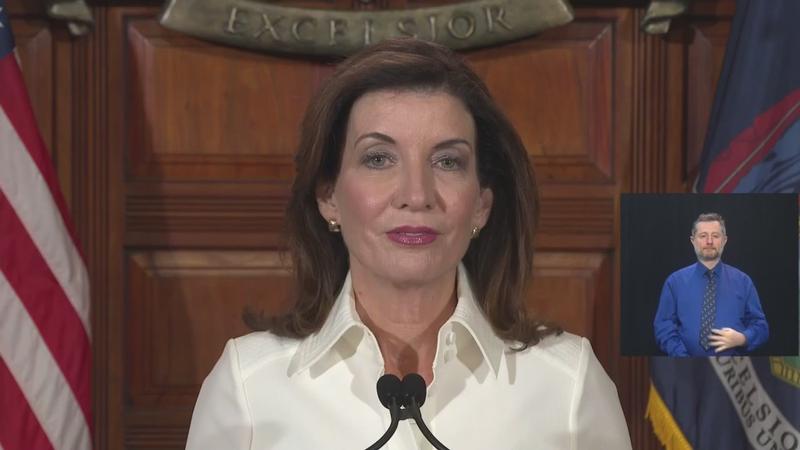 As of Tuesday, 76% of New Yorkers have received at least one dose of the COVID-19 vaccine.

The decision comes as COVID-19 cases continue to increase across the state, and the country and concerns over the ore transmissible delta variant persist.

Hochul also pledged quick action to unstick an application bottleneck that has kept federal aid money from flowing to renters who suffered financially because of the pandemic.

"I want the money out—and I want it out now," Hochul said. "No more excuses and delays."

Hochul said she is hiring more staff to process rent relief applications "immediately" and "assigning a top team to identify and remove any barriers that remain."

She also announced her intention to make sexual harassment training for New York state employees be live, rather than a virtual program they can "click-through." This comes after former governor Andrew Cuomo announced his plans to resign a week after New York State Attorney General Letitia James’s released the findings of her office’s investigation, which recounted the stories of 11 women who claim they were sexually harassed or otherwise treated inappropriately by Cuomo.

Hochul was Erie County clerk, a congresswoman, and lieutenant governor for seven years.

"To those New Yorkers who have yet to meet me, I say this: you may not know me, but I know you," she said.

Hochul was sworn in at midnight, right after Cuomo left office at 11:59 p.m. on Monday, Aug, 23. Her swearing-in ceremony was held at 10 a.m. on Tuesday, making her the first female governor of New York.

Watch her full press conference in the video below: