Hochul: Decision on mask mandate to be announced Wednesday

Speaking at a news conference Monday about ice storm damage in Ulster County, Hochul said she has several meetings to review the data and will announce her decision as the current mandate runs through Feb. 10.

As for the mask mandate in schools, Hochul says that will take more time. That deadline is Feb. 21. She says she’s meeting with school superintendents on Tuesday.

Hochul was asked if New York could set a similar end date, and she reiterated her position that it depends on the numbers and again, raised concerns over the state’s low vaccination rate among children.

Governor asked about mask-mandate for schools (which is set to expire on 2/21 if not renewed) she was non-committal saying she wants child vaccination rates to be higher as she continues to gather the data. She adds, we are trending in a "very, very good direction."@news10nbc

"New York—what I understand, Governor Murphy is talking about is the situation one month from now," Hochul said. "So I’m going to continue to head in that direction we’re hoping to get to that, I’ve said that for weeks that is our goal but I’m gonna continue looking at the metrics."

She said while she does that, masks stay on while in school. 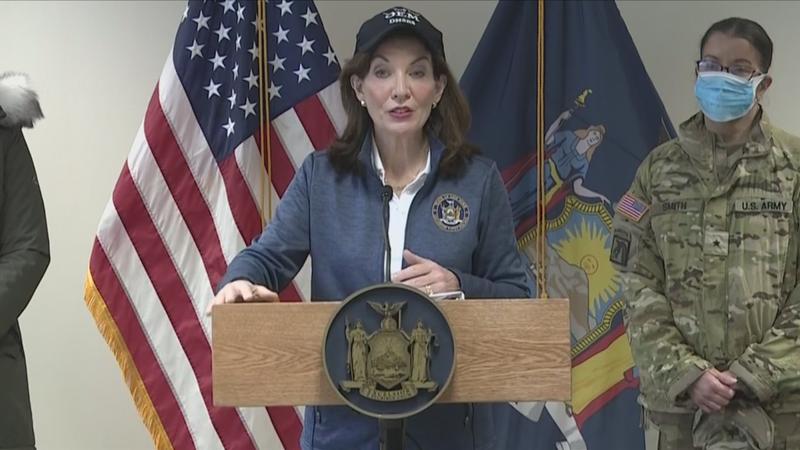 Gov. Kathy Hochul holds a briefing on the state's storm response in Ulster County and to the COVID-19 pandemic in Kingston, NY on Feb. 7, 2022.[News10NBC]

"I wanna be optimistic," Hochul said. "I am optimistic that were trending in that direction but I still need the time and I’m assessing… tomorrow I have a conversation with school superintendents. I’ve been in contact with the leaders of every major hospital system to talk about their capacity and what their staffing levels are now in light of the fact that just weeks ago they were overwhelmed."

Hochul said she plans to meet with school superintendents on Tuesday about the mask mandate.

Approximately 34% of children aged 5-11 have received one dose. Hochul was asked Monday if there is a certain percentage she wants to see before lifting the mandate.

"I’d like to see it higher than 34% which is what we’re looking at right now for the 5 to 11-year-olds I know we can do better than that," Hochul said.

The Finger Lakes’ percentages are on par with those in the rest of the state.

"We have over a third of all kids ages 5 to 11 which is our youngest age group eligible, being vaccinated so it’s a good number but it’s not nearly obviously enough," said FLX Vaccine Hub Director of Analytics Dr. Irena Boyce.

When asked how demand for those pediatric vaccines is trending, Boyce said, "Now we are at a place, I don’t want to say plateauing because we’re still increasing in kids vaccinations but at a much slower rate."

"As states and entire nations drop pandemic-era restrictions, New York Governor Kathy Hochul is fighting tooth and nail to keep her unconstitutional mask mandate in place. At the same time, these politicians and bureaucrats in New York and around the nation hypocritically flout their own rules, appearing maskless in photo ops with children who are forced to mask up in school all day.

"We know these decisions are not based in science, they are based solely on political science. Enough is enough – it’s time for Governor Hochul to stop the insanity, end the mandates and let New Yorkers return to normal."