‘I don’t know if my kids will ever get over it’: mother responds after car strikes house

ROCHESTER, N.Y. (WHEC) — Imagine you’re sitting at home, laughing with your kids while they have a snack. Now imagine that all gets interrupted when a car careens into your living room, covering your kids with debris.

"I just fixed my two sons some food, and they were sitting down, one sitting at the table, and one had just sat on the couch, and we were laughing and I think they were wanting to change the station to an anime station, and the next thing you know, I just hear a boom,” said Shannon Evans, a mother of five whose home off of Clifford Avenue is now uninhabitable.

Evans spent the moments after the impact desperately trying to locate all five of her children.

"My kids were just everywhere… everything was just the smoke from the car, I don’t know where anyone’s at, nobody knows what happened, it just happened so fast," Evans told News10NBC Thursday. "I just remember pulling my three kids from under the rubble and I couldn’t see the other two, so I thought they were under the car."

Four of Evans’s five kids are currently staying with a family member, one is currently at Golisano Children’s Hospital recovering from serious injuries. 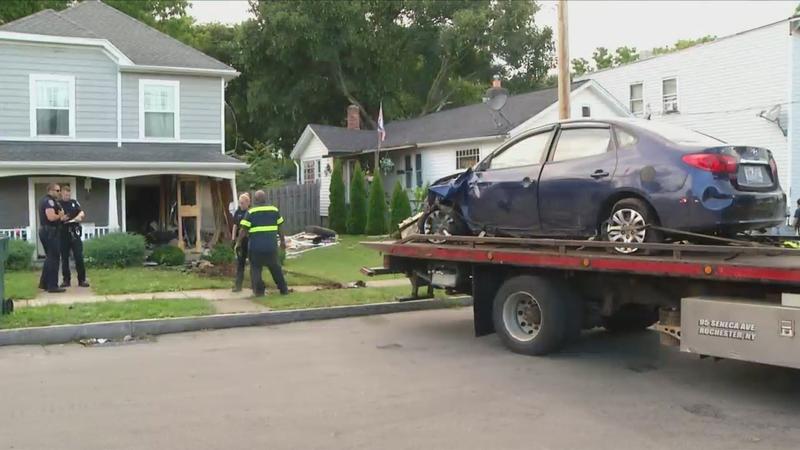 "She has some fractures and a broken rib and a lacerated liver, so… she got hit the hardest," Evans said.

Several neighbors and first responders immediately jumped in to help Evans and her family. She extends her gratitude to those that came to her family’s aid. Considering how close the car came to hitting her children, Evans says it’s nothing short of a miracle that everyone made it out alive.

"I don’t know who was protecting my kids or what, but my kids should’ve been under that car, you know? They were all right there," Evans said.

A GoFundMe campaign is underway for the family, you can learn more here.