ROCHESTER, N.Y. (WHEC) — If you live in the City of Rochester and noticed your energy bill is on the rise, you’re not alone. The city automatically switched everyone to a new 100% renewable supplier for electricity and customers are finding out it’s more costly and a bit confusing.

When PJ Carsonladd opened his RG&E bill this month he was taken aback.

“Normally, I’m like well yeah that seems about right, yeah this is how much we average and stuff and it was this giant increase and I’m like well something is not right here, I shouldn’t be paying this much,” he told News10NBC.

Electric supply rates went up last month regardless of the supplier but there was also a major change for people who live in the City of Rochester.

Unless you specifically opted out, the City of Rochester rolled everyone into what’s known as a community choice aggregation (CCA) program which leverages collective purchasing power to negotiate rates for a 100% renewable electricity supply. 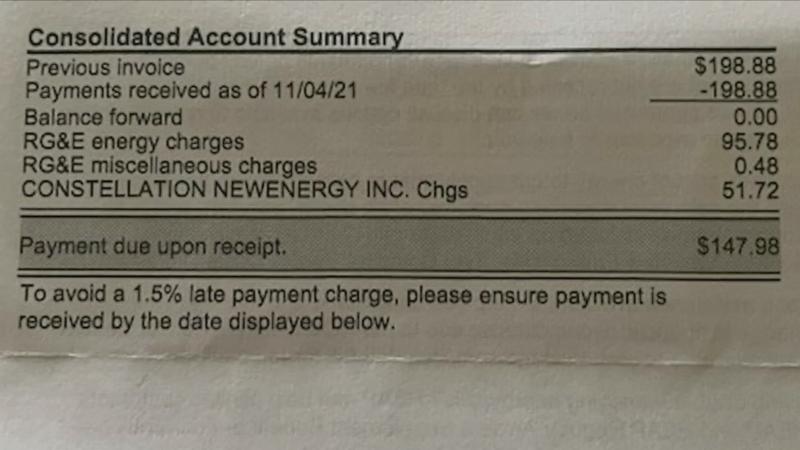 So now, the supply of electricity for most Rochester residents is provided by a company called Constellation NewEnergy Inc. Carsonladd recalls talk of this CCA program over the summer.

“[I remember they said] it might be a couple more dollars, maybe not that overwhelming so, I thought well it’s green energy so that’s fine,” he said.

Since the City switched to Constellation, the cost for residents has been about two to three cents higher per kilowatt-hour than it would have been had you opted out and stayed with RG&E.

But customers are also noticing that the promised price isn’t what was advertised. On its website and during its public hearings, the City of Rochester promised a fixed rate for 24-months of $.058/kWh but when the bills arrived, the fixed rate was listed as $.0598/kWh.

Here’s why: The City of Rochester collects a 3% “Gross Receipts Tax” on electricity supply. In this case, it’s not listed separately but added to the fixed rate.

A spokesman for the City said, “We are working with Constellation New Energy to make the bill clearer for customers by showing the CCA rate and the GRT as separate line items.”

“It kind of bothers me because they didn’t really do a good job educating people,” Carsonladd said, “like you got a flyer but like they made it seem like it’s going to be no change really it’s just gonna be green energy.”

Seventy-one municipalities across New York State now participate in CCAs including many here in the Finger Lakes region. In most cases, customers will pay more for 100% renewable options. You can opt out at any time.

To learn more about the program or Opt-Out, click here.