Jacquelyn is a Senior Assistant Public Defender at the Monroe County Public Defender’s Office, an active Democrat, mother of three-year-old twins, and the proud wife of a military veteran. She has dedicated her life to public service and hopes to continue serving the community as a Rochester City Court Judge.

Van White has served as a prosecutor, civil rights, and defense attorney. He has three decades of courtroom experience. As a prosecutor and defense attorney, his cases have ranged from simple misdemeanor charges to complex felony murder cases. White is the Founder and Director of the Center for Study of Civil and Human Rights Law. He has served as Board President of the Rochester City School District, Board of Education Commissioner of Rochester City School District, Adjunct Profesor at SUNY Brockport, and Special Counsel to the Mayor of Rochester. White has led and created initiatives like Teen Court, Pathways to Peace, and the Rochester Challenge Against Violence. 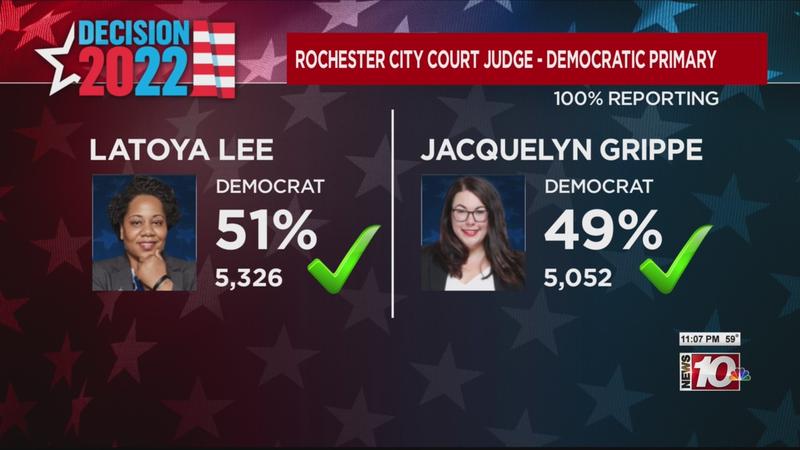 LaToya S. Lee was raised in the City of Rochester and attended Rochester City schools. After high school, she received an Associate’s degree in Paralegal studies from Finger Lakes Community College, a Bachelor’s degree in Paralegal studies from Hilbert College, and a Juris Doctorate degree from Thomas Cooley Law School. Mayor Malik Evans appointed her as Rochester City Court Judge on February 16, 2022. Prior to her role as a Judge, she worked as an Associate Court Attorney for two Judges in Rochester City Court. She also worked as a Traffic Prosecutor for the City of Rochester, a Public Defender for the Monroe County Public Defender’s Office, and a Mortgage Foreclosure Defense Attorney with Empire Justice Center.

Constance Patterson is a Rochester native. She received her law degree from Emory Law School and participated in internships with the Georgia Public Defender’s Council and the Georgia Innocence Project. While providing legal resources to people who may not have the means to mount a defense, she found her true calling: being a voice for those without one.

While working in the South, she spent time with the DeKalb County District Attorney’s Office, learning the prosecutors’ vantage point in addition to that of the defense. After completing law school, she worked at the National Association of Attorneys General (NAAG) in Washington, D.C., where she trained Attorney General offices throughout the United States on new and arising issues.

In 2017, Patterson returned home to Rochester to serve her community. Since then she has worked as Monroe County Assistant District Attorney, handling cases in town courts and city courts, litigating child abuse cases, felony cases, and many other crimes.