Jim Kelly Football Camp back on at Highmark Stadium

BUFFALO, N.Y. (WHEC) — The Jim Kelly Football Camp has been a cornerstone of youth football in Western New York for more than three decades.

Like many events, it was canceled last year due to COVID-19, but it returned to Buffalo for the 33rd installment this week.

In total, 250 kids, ages 7 to 13, are participating in the three-day camp, which wrapped up Wednesday at Highmark Stadium.

On Thursday, 250 more young athletes will take part in a one-day clinic.

It’s a non-contact camp that offers a special chance for young kids to learn from the Bills legend himself while taking in fundamentals, nutrition and sportsmanship. 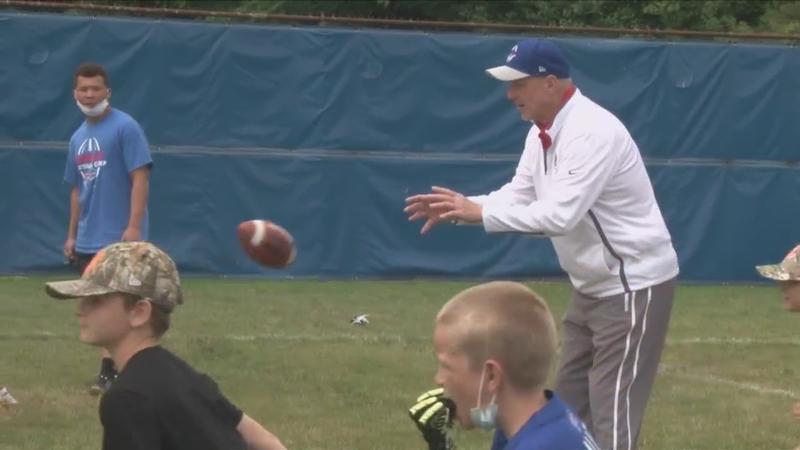 There has been talk of the Buffalo Bills potentially building a new stadium.

They’re under contract to remain where they are through at least 2023, and Kelly shared his thoughts on the matter.

"I have my ideas," Kelly said. "I think this is good for another ten years, but even though they’d done a great job taking care of it, I said, ‘Why don’t you just build right across the street?’ I think downtown, even though it sounds good, it’s gonna be a ton of work. It’s gonna be a lot of money, and I don’t know about tailgating. Anybody know we have a fan base called Bills Mafia now? They want tailgating, and I don’t know how much tailgating you’re gonna be able to do down there, but whatever they do, I’ll be pulling for them, but I would like to see it stay around here."

He couldn’t get away without being asked about his thoughts on what Josh Allen is bringing to the Buffalo Bills.

"I know him well enough to know that the kid can play," Kelly said. "If you can get the right material around him, which I think he has, and the offensive line gives him time to throw, things will be awesome. And talk about my records, I knew before last season started that those records aren’t going to stay around very long."