ALBANY, N.Y. (AP) — Democrats’ plan for redrawing New York’s congressional and legislative districts cleared an initial hurdle Thursday when a judge said it was too close to the state’s primary elections to throw the maps out, even if they are unconstitutional.

See the full map at https://newyork.redistrictingandyou.org

Judge Patrick McAllister said at a hearing in Steuben County that he isn’t inclined to halt New York’s election process by striking down those maps now because there isn’t enough time for them to be redrawn in time for the June primary.

Republicans argued in a lawsuit that the maps were unconstitutionally gerrymandered to benefit Democrats and marginalize GOP voters.

“Even If I find the maps violated the Constitution and must be redrawn, it is highly unlikely that a new viable map could be drawn and be in place within a few weeks or even a couple of months,” McAllister said. “Therefore, striking these maps would more likely than not leave New York state without any duly elected congressional delegates.” 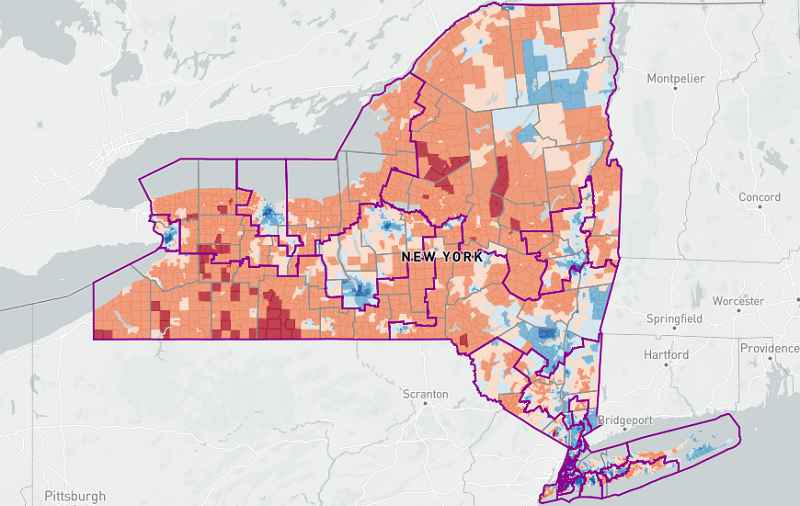 The judge said the lawsuit could continue, however, and suggested he could call for new elections next year if he ultimately decides the maps were improperly gerrymandered.

The judge said both sides will bring in expert witnesses March 14 to figure out “where the truth lies.”

“Until I have heard this testimony, I’m not in a position to know whether to strike down these maps or uphold these maps,” he said.

The Democratic-controlled legislature redrew the boundaries of legislative and congressional territories this winter as part of the once-per-decade redistricting process kicked off by the 2020 Census.

The maps, if upheld, could expand Democrats’ power for years in a state where the party already dominates: Democrats would make up a strong majority of registered voters in 22 of the 26 congressional districts the state will have in 2023. Republicans, who now hold eight of New York’s 27 seats in Congress, would only have an advantage in the remaining four districts.

New York voters in 2014 amended the state’s constitution to ban drawing maps “for the purpose of favoring or disfavoring incumbents or other particular candidates or political parties.”

The judge said, however, that the group of Republican voters challenging the maps in court have an “extremely high” bar to prove that the Legislature drew the maps in violation of the Constitution.

Lawyers for the Republicans are pointing to analyses by nonpartisan groups that have cited New York’s new congressional maps as giving too much of an advantage to one political party, in this instance, Democrats.

But lawyers for Democratic legislative leaders have argued that the Legislature’s maps are presumed to be in line with the Constitution, and that the maps reflect population loss in rural upstate communities.

Former U.S. Rep. John Faso, a Republican who has been helping muster support for the lawsuit, said in a statement that its backers were pleased the court didn’t dismiss the case.

“Our efforts to overturn this unconstitutional gerrymander of congressional and state senate districts will continue on an expedited basis,” he said.