ROCHESTER, N.Y. (WHEC) — News10NBC obtained new police body camera video that shows the first time Daniel Prude was put in police custody. And the lawyers representing the seven suspended officers say they did what they were trained to do.

The body camera video was provided by the lawyers at their news conference Thursday. The other video they provided was the New York State Division of Criminal Justice Services training video that shows the same restraints used on Daniel Prude when he stopped breathing.

They say it’s important to know what the officers knew on the morning of March 23 and they say the officers followed their training. 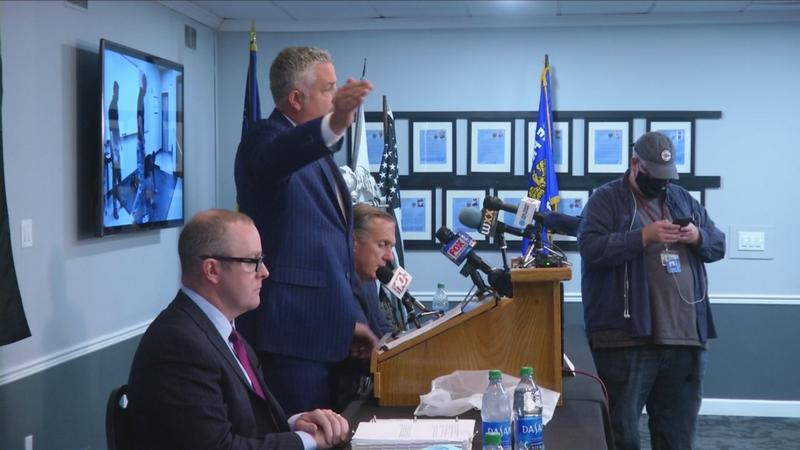 "I never do nothing to hurt nobody. My name is Daniel. I’ve been willing to die. Please kill me."

That’s what you hear Daniel Prude saying in the new body camera video we got.

The video was recorded during the mental health arrest of Prude the night he arrived in Rochester from Chicago.

Daniel is in a white tank top.

Four hours after that, at 3:23 a.m., Daniel Prude was pinned to the ground on Jefferson Avenue by officers and stopped breathing.

Mike Schiano, attorney for Officer Francisco Santiago: "The purpose of this is to try to show you folks what exactly happened that night and why these officers acted the way they did."

Thursday the lawyers for the suspended police officers showed us the state training video that teaches officers how to pin and restrain a person on the ground.

"I put my hands right around his ears and his head," said the officers leading the training. "I’m going to be in like a teepee. So all my weight is going to be on his head."

The lawyers say this is the technique the officers who pinned Prude were trained on in January.

Dan Mastrella, attorney for Ofc. Troy Taladay: "(It) is a well-accepted means of restricting the movements of a non-compliant individual using the least amount of force possible."

The New York State Division of Criminal Justice Services says the training video the lawyers showed does not train recruits to use any defensive tactics after handcuffing occurs.

Body camera footage shows Prude was handcuffed when the technique was used.

Reenah Golden is a theater owner, Black Lives Matter organizer and she was at the news conference.

Golden: "I don’t hold a lot of faith in what they have demonstrated as training especially if that training results in someone’s death."

The lawyers also released a video posted on Facebook, showing Daniel Prude running naked a short time before he was found by police. The lawyers say the officers knew Prude ingested the drug PCP which they say causes erratic behavior and a spike in body temperature.

Matt Rich, attorney for four RPD officers: "His death, while tragic, was the result of that acute (PCP) (sic) voluntary intoxication and not the result of anything the officers did or did not do."

"You can see it as well as anybody else can see it and it’s just offensive to continue to accept no responsibility for this man’s death," attorney Don Thompson said.

Thompson is the lawyer for Daniel Prude’s family. He watched the news conference.

Brean: "Is there one specifically that you found most troublesome?"

Don Thompson, attorney for the Prude family: "Well there was the characterization for PCP overdose as the cause of death. That’s the lie that got La’Ron Singletary fired and they’re still trying to trot it out there."

The Monroe County Medical Examiner’s report says the primary cause of Prude’s death was "asphyxiation in the setting of physical restraint."

The lawyers say the natural human instinct is to put a blanket over a naked man outside on a cold street but their argument is Prude was probably burning because of the effect of PCP.

James Nobles, attorney for Ofc. Mark Vaughn: "The worst thing they could have done was to give him a blanket. He was literally cooking from the inside out."

Brean: "When I talk to my neighbors one of the things that bothers them, and they’re laypersons just like myself when it comes to law enforcement, they’re wondering where was the humanity? And where was the compassion after 3 a.m. on the morning of March 23rd?

Nobles: "And what do you mean by that Berkeley, do you mean they should have given him a blanket or should have put him in the police car? What is specifically your question if I can drill down on that a little further?"

Brean: "Yeah, sure. Why at the time didn’t they look to try to care for him, a man who was struggling on the ground?"

Nobles: "So Berkeley, I think I’ve answered the questions about the blanket as well as putting him in the police car. The humane thing to do was to get him to the people to give him the medical treatment he needed and they were trying to do that in the most expeditious manner they could."

The police officers are suspended with pay.

Click here to see their biographies provided by their attorneys

The New York State Attorney General’s office is handling the case. A grand jury has not been seated by the lawyers say they’ve spoken to the AG’s office.

After the news conference, organizers and supporters for free the people roc gathered in the parking lot of the police union office.

The news conference happened inside the building.

The supporters say a total of five people were detained including Ashley Gantt, who is one of the leaders of Free the People Roc.

Her fellow leaders spoke to the media at the scene.

"RPD has no clue how to deescalate. That’s why Daniel Prude is dead today. That’s why folks have been brutalized by this police force. because they have no clue what to do other than to arrest," Danielle Ponder said.

"We should not be allowing, as a city, as citizens, for our officers to be functioning from a slave control blueprint of policing. That is why they arrested a 14-year-old girl today," Rev. Myra Brown with Spiritus Christi Church said.

Watch the video in the player below to hear more from the protesters (mobile users, click here):

News10NBC asked the RPD why the three people we saw detained were arrested and what are they charged with.

An RPD spokesperson said when she has that information, she will share it.