These three new laws support the Climate Leadership and Community Protection Act goal of an 85 percent reduction in greenhouse gas emissions by 2050 while ensuring a just and equitable transition for New York workers and communities.

"The impacts of climate change are felt all over New York State, and in response we are taking bold action and building a stronger, more resilient New York by guaranteeing healthier, greener places to live and work," Governor Hochul said. "Now more than ever, the importance of a cost-effective green transformation is clear, and strengthening building codes and appliance standards will reduce carbon emissions and save New Yorkers billions of dollars by increasing efficiency. This multi-pronged legislative package will not only replace dirty fossil fuel infrastructure, but it will also further cement New York as the national leader in climate action and green jobs."

Additionally, this legislation authorizes the New York State Energy Research and Development Authority (NYSERDA), in consultation with the Department of State, to adopt efficiency standards for appliances and equipment that reduce energy usage. Expanding appliance standards will reduce emissions and deliver $15 billion in savings to New Yorkers through 2035, including $6 billion to low- and moderate-income households, by reducing wasted energy from the use of less efficient everyday products and appliances.

The legislation also authorizes the Governor to designate the President of NYSERDA and the Commissioner of the Department of Environmental Conservation as members of the State Fire Prevention and Building Code Council (Codes Council), to align the work of the Climate Action Council with the Codes Council to achieve the goals of the Climate Act through advances in the building energy code. 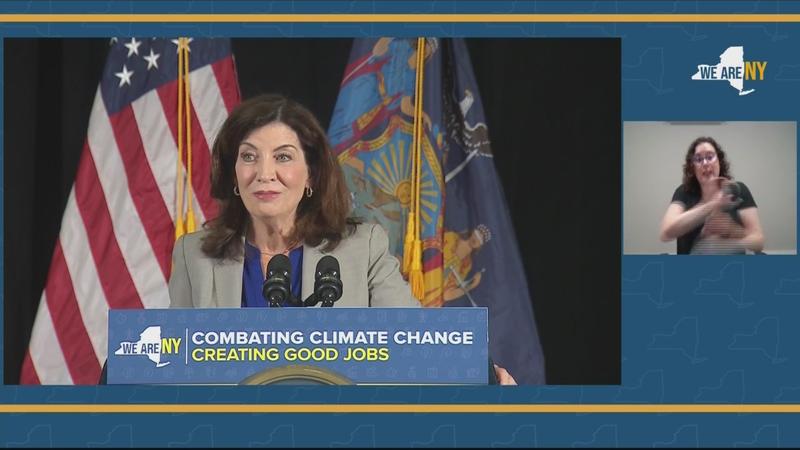 Legislation A.10493/S.9422 allows utilities to own, operate, and manage thermal energy networks, as well as supply distributed thermal energy, with PSC oversight. Heating and cooling networks – also referred to as community thermal or district energy systems – are a resilient, energy-efficient, and clean solution that can also help New York State meet its ambitious climate goals. By leveraging multiple sources of existing waste heat (such as water, wastewater, and geothermal, among others) and connecting a diverse set of building types on a shared loop, thermal energy networks can provide significant operating and energy cost savings when compared to more traditional heating and cooling methods, while also reducing demand on the electric grid.

This legislation will promote the development of thermal energy networks throughout the State, providing benefits by reducing fossil fuel usage for heating and cooling through community-scale infrastructure solutions, along with employment opportunities for existing utility workers and new workers. The enabling legislation will build on the progress of, and complement, NYSERDA’s active community thermal program, which to date has funded feasibility studies, detailed design studies, and other advanced project construction incentives to more than three dozen sites across the state.

Prevailing Wage for Renewable Energy Projects One Megawatt and Larger

Legislation A.9598/S.8648 requires prevailing wage for renewable energy projects one megawatt and larger that involve the procurement of renewable energy credits from a public entity, ultimately supporting the Governor’s new goal for ten gigawatts of distributed solar by 2030, enough to annually power nearly 700,000 average-sized homes. New York’s ten gigawatt roadmap, approved by the PSC in April, provides a comprehensive strategy to expand the state’s successful NY-Sun initiative into one of the largest distributed solar programs of its kind in the nation. The public investment to achieve ten gigawatts of solar will spur approximately $4.4 billion in private investment to bring awarded projects to fruition, for a total of $5.9 billion in expected investment over the mid- to late-2020s. 6,000 additional solar jobs will be created across the state, including with the State’s first application of prevailing wage requirements for solar projects between one and five megawatts.