Local lawmakers react to Biden’s State of the Union address 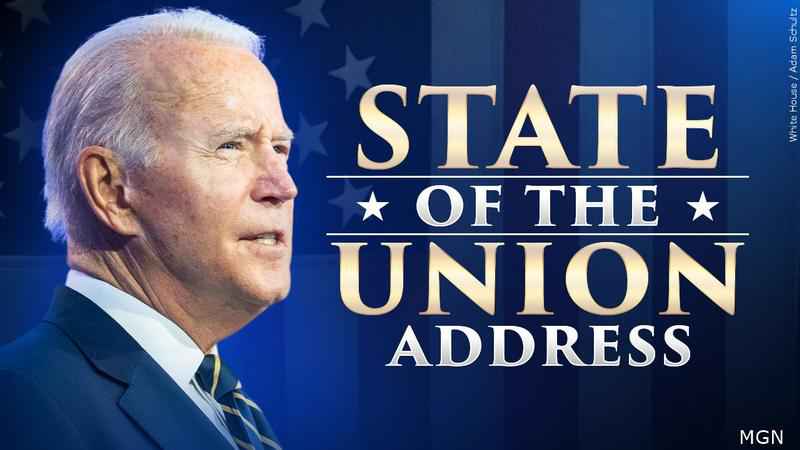 Biden began his speech focusing on the violence in Ukraine, before moving into the more traditional points of a State of the Union address, going over his plans for his domestic agenda.

Local lawmakers are sending in their reactions.

"I say to the American people now is not the time for more political speeches. Leadership means inspiring the hearts and minds of all Americans who, in these turbulent times, do not need partisan posturing or more divisive rhetoric. We need solutions that unleash the power of the American people, not the power of our government. We can not spend tax dollars to get out of the inflation trap. That will only compound the problem. Tonight, we heard a speech offering the government as the solution. America’s power rests in its people. I trust the people and therefore reject the heart of this speech. It is time to solve our problems through true leadership willing to work with both sides to achieve people-driven solutions to the serious issues facing our nation. The time is now."

“President Biden’s first State of the Union Address comes at a time when our nation faces some of the greatest security challenges in modern history. Whether we are talking about the evolving threat landscape created by Russia’s heinous assault on Ukraine, resurgent international terrorism enabled by the Taliban’s seizure of Afghanistan, rising crime in communities across the U.S., or the unprecedented crisis at our southwest border. Americans deserve clear, concise, and transparent answers on what will be done to address their many justified concerns.

“With this in mind, I leave tonight disappointed by President Biden’s failure to sufficiently and realistically address one of the most serious security challenges facing our nation: the sustained and self-inflicted crisis on our southwest border. Since President Biden took office, there have been over 2.1 million migrant encounters at our southwest border, but this crisis is much more than migrants seeking asylum: criminals, weapons, drugs, and trafficked persons are coming across our border in record numbers. Fentanyl is plaguing communities like the one I represent in Central New York, poisoning far too many Americans and becoming the leading cause of death of young adults. Stopping the flow of fentanyl and dangerous synthetic drugs into our communities means taking real steps to secure our border, like finishing the border wall, supporting law enforcement on the ground, and reinstating common sense policies that combat illegal immigration and human trafficking. I’m disappointed Biden failed to acknowledge the more than 100,000 Americans who died from drug overdoses in the United States last year, representing a grim milestone as the highest number of drug overdose deaths in U.S. history.

“Additionally, I am concerned that President Biden missed a crucial opportunity to thoroughly address cybersecurity, which is the preeminent threat to our country right now. This is an issue that has been the subject of significant bipartisan agreement between the House Homeland Security Committee and this Administration, and the President needed to demonstrate strong leadership by articulating the significance of this issue to Americans from all walks of life, while also providing a clear plan on how the United States will mitigate cyber threats facing the United States from Russia.

“In the weeks and months ahead, Republicans on the House Homeland Security Committee will continue to put forward substantive policy solutions that address these issues. I sincerely hope that President Biden and his Administration will correct course and join us in prioritizing our nation’s security. The American People deserve nothing less.”

“We come together at a difficult moment, facing serious challenges at home and around the world. I’m pleased this State of the Union Address underscored the critical importance of supporting working families and our communities in their time of need. This past year has been difficult on all of us, but this evening, President Biden made clear that better days lie ahead.

“The President outlined an agenda on which my colleagues and I in Congress are already taking action: we’re working to cut the cost of critical everyday expenses like childcare and prescription drug prices; enact a permanent expansion of the Child Tax Credit to support families and their ability to meet their most basic needs; and protect and expand essential women’s rights like the right to choose.

“I’m particularly proud President Biden chose to highlight the America COMPETES Act: comprehensive legislation to strengthen America’s competitiveness by investing in innovation, a concept I have long championed that holds significant potential for the Rochester community. This investment will not only create jobs, grow our regional economy, and revitalize our local business community, it will ensure America can outcompete China and any nation in the world, now and for decades to come.

“As we look towards the future, I am reminded of our past—one rooted in the fundamental truth that the United States of America has always stood up for freedom and democracy, at home and abroad. It is this unwavering commitment that guides us, and it is with this in mind that we stand alongside the brave people of Ukraine in defending their sovereignty.

“I look forward to the work ahead to deliver on this agenda and uplift families in the 25th Congressional District.”

"In his first State of the Union Address, President Biden outlined a bold vision to build a stronger America through smart federal investments that support hard-working Americans. New Yorkers have seen firsthand the benefits of the historic accomplishments of the President’s administration, including vaccinating 200 million Americans, spurring the fastest job growth in history, cutting child poverty, and providing a once-in-a-generation investment in our nation’s infrastructure.

"Through President Biden’s leadership, America has made enormous progress in combatting the pandemic and setting the stage for our economic recovery. But we still face emerging threats that will require a focused, unified approach: growing armed conflict in Europe, rising inflation costs, increasing energy prices driven by a reliance on fossil fuels, and a rapidly changing climate – the existential threat of our time. I applaud the President for his ongoing efforts to form a strong and united coalition of international allies and provide direct assistance to Ukraine, as well as calling on Congress to take action that cuts costs for middle-class Americans and addresses the core health and economic challenges created by climate change. And I’m deeply grateful the president honored the memory of our fallen NYPD heroes, Officers Mora and Rivera, as he discussed comprehensive support for our public safety system.

"I thank President Biden for also highlighting the need to expand domestic manufacturing to combat inflation, in particular within the semiconductor industry. My administration has laid the groundwork to cement New York as the national hub for semiconductor manufacturing, and we are ready to work with the President to make his vision a reality. His leadership has put America on a path to a better, more inclusive nation, and I look forward to our continued partnership that will usher in a New Era for New York that will endure through the ages."