ROCHESTER, N.Y. (WHEC) — Advocates across the country and in Rochester are taking their stands over abortion.

They marched in more than 600 demonstrations across the country. These marches come as Texas put an anti-abortion bill into effect last month that bans abortions after six weeks, with no exceptions for rape or incest.

"My best friend lives in Texas, and I know her rights are not protected. There are this many people that are wanting to support and understand how important in 2021 our rights are,” said Ashley Teague, a local activist.

Teague says she came out to Martin Luther King Park because she is concerned about the new abortion law in Texas.

"We are getting justice for abortions, that this is it, we are not going to do this generation after generation,” Teague said. 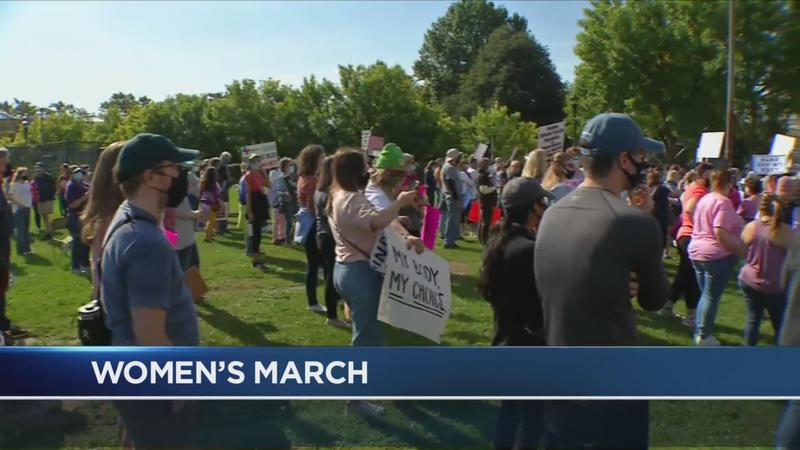 Hundreds of participants held signs that said "Bans off my body" and "My body my choice".

Anti-abortion protesters also came together at MLK Park and a few blocks away at Washington Park to have their say, too.

"These are simple, basic ‘pro-peace, pro-life’ signs, that they were so concerned with blocking so they were just jumping out in front of us and blocking everything we had to say,” said Michele Sterlace, executive director for Feminists Choosing Life of New York.

Sterlace shared her beliefs on the topic of abortions with News10NBC.

"Pro-choice is ultimately pro-violence because abortion is an act of violence. It destroys a human life,” Sterlace said.

Governor Kathy Hochul was in Seneca Falls over the weekend speaking at one of the rallies.

"In 1970, we were three years ahead of the nation in ensuring reproductive health rights right here in the state of New York," Hochul said.

"On a contentious topic, you have to anticipate that folks are going to be out there with differing opinions. That is the beauty of the First Amendment where we can have robust debate, protest,” Sterlace said.

These marches also come ahead of the Supreme Court’s next session on Monday. Among the cases before the court is one that could challenge the current standing of the landmark Roe v. Wade that legalized abortion nationwide.