ROCHESTER, N.Y. (WHEC) — Kenneth Nixon, 18, was arraigned Friday in Rochester City Court in front of Judge Nicole D. Morris. He’s been formally charged with two counts of each of the following:

Police say Nixon fired a gun at two Rochester Police Department investigators who were sitting in an unmarked patrol car Wednesday night on Glenwood Avenue in the City. While the car was unmarked, RPD says the officers sitting inside it were wearing shirts with the word “POLICE” on them.

The felony complaint states that Nixon “knowingly, intentionally and unlawfully attempted to commit an aggravated assault upon a police officer or peace officer when, with intent to cause serious physical injury to a person whom he knows or reasonably should know to be a police officer or a peace officer engaged in the course of performing his official duties, he causes such injury by means of deadly weapon or dangerous instrument.”

In court Friday morning, Nixon’s defense attorney argued that the word “POLICE” on the investigators’ shirts would not have been visible from a distance. Nixon’s attorney entered a plea of not guilty on his client’s behalf, adding that he’s been enrolled with a temp agency for work, and has lived in this community his whole life. 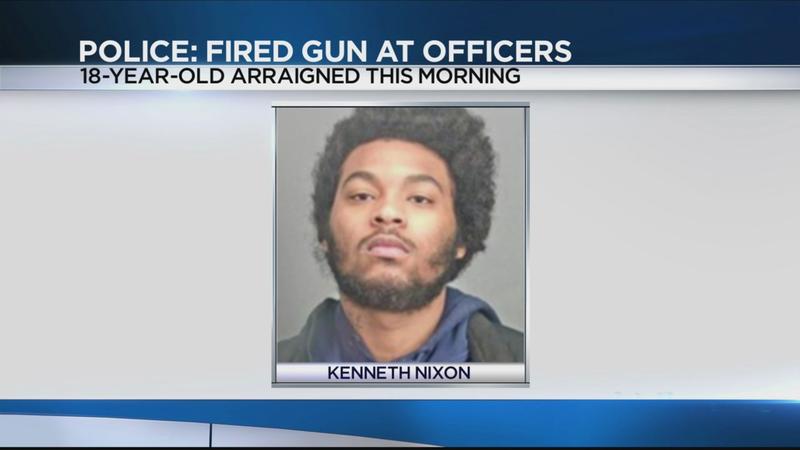 Prosecutor Greg Clark said that Nixon has an “open felony matter” and requested that bail be set at $400,000 cash. Judge Nicole D. Morris set bail at $30,000, and scheduled a preliminary hearing for January 25, 2022.

Friends and family of Kenneth Nixon were present in court on Friday, but declined to comment after the case was adjourned.