ROCHESTER, N.Y. (WHEC) — Mayor Malik Evans praised St. John Fisher College as a beacon of opportunity and education in the Rochester community, as the institution prepares to change its destination to "university".

The name will change to St. John Fisher University on July 1.

The school’s president, Gerard Rooney, spoke at a Monday morning conference about the significance of the name change. The New York State Board of Regents changed its definition of a "university" as an academic institution that offers at least three graduate programs, as opposed to at least three doctoral programs. Fisher offers graduate programs in pharmacy, nursing, and education.

Rooney said that the development of acclaimed education and research opportunities was the goal of the Basilian Fathers, who founded the college 74 years ago. He said Fisher’s first president had the goal of eventually having the institution designated as a university. 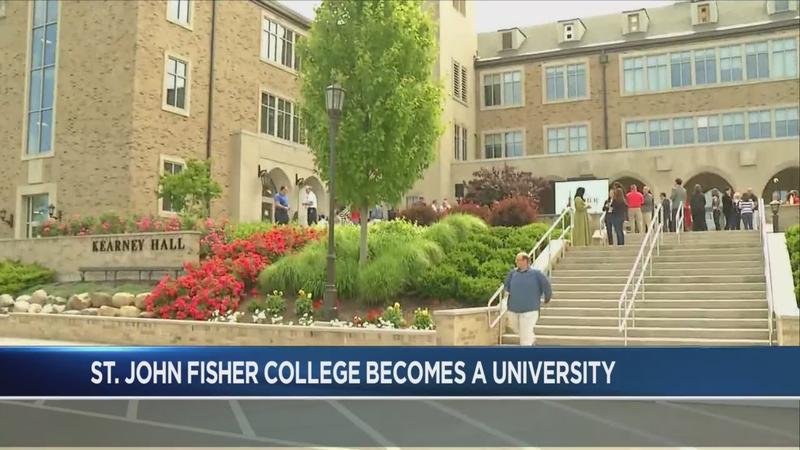 "The university for us conveys greater prestige. it’s something that will give us the greater opportunity to become known more broadly institutionally,’ Rooney said.

Evans said he’s excited to see what Fisher’s academic programs will be like in the next 74 years. The college developed from a school for young Catholic men to an institution open to people across all faiths and gender.

Evans said the name change ties into the larger context of driving innovation in Rochester, with the prestige attracting more people. He said Fisher is one of many academic institutions where campus members and alumni help to strengthen the surrounding communities.

Fr. Kevin Mannara, director of Fisher’s campus ministry, said the institution honors the legacy of its founders by producing well-rounded graduates. He said that although the college has been a non-religious institution since 1968, faith has been important to Fisher’s development.

The fall of 2022 freshman class will likely be Fisher’s largest incoming class, Rooney said. More than 1,600 people have earned doctoral degrees from the college.

Current students, such as Student Government Association President Ian Klenk, will have started their higher education at a "college" and will be graduating from a "university."

"I will say that the students who are currently at Fisher are in a very good spot because we get two years of the old merch, and now we have two years of the new university merch. So that’s pretty great," Klenk said.