Mayor Evans on ATVs and dirt bikes: “We plan on enforcing that legislation that was passed."

ROCHESTER, N.Y. (WHEC) – Mayor Malik Evans is already hearing about the dirt bikes and four-wheelers popping up around the city as it gets warmer.

“There was over about over 50 ATV, dirt bikes, motorcycles, and they were driving down the sidewalk,” community member Jim Pietrzykowski said. “They almost hit us. We were landscaping the front yard and there were kids down the street playing and it was chaos.”

Pietrzykowski said yesterday a group of motorcycles, four-wheelers and dirt bikes sped past him and is urging the county and city to do more.

“There’s a lot to handicap on the street, too,” Pietrzykowski said. “And last summer there was an issue and the police didn’t do anything and you would see them chase them, but nothing happened.”

Security video captured outside of News10NBC from Sunday evening shows a big group weaving down East Avenue turning down Broadway Street and then again outside a police investigation on Columbia Avenue where a four-year-old was killed after being hit by a car. Then again Sunday as our cameras captured more weaving through the Upper Falls area. 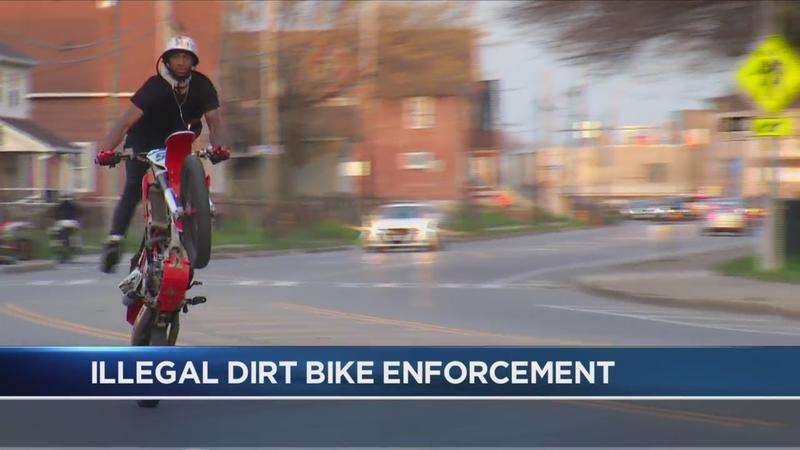 “So what we’re saying is that you will see enforcement as it relates to these four-wheelers because they are not legal and they are not safe,” Mayor Malik Evans said.

Last year, there werE several incidents where people got hurt and a 9-year-old boy died in a motorbike crash.

Mayor Evans said last year they passed legislation in the county and the city to encourage people to do the right thing in regards to these vehicles wreaking havoc on our streets.

The measure gives police greater leeway to confiscate illegal bikes and sets big fines to retrieve them, $500 for a first offense, $2,000 for any other ones.

Those like Pietrzykowski who have to deal with this, say more needs to be done.

“Meigs street now has speed bumps,” Pietrzykowski said. “So these ATVs and dirt bikes are just going to fly over and they’re either going to kill themselves or they’re going to kill a little kid.”

Last year many police departments told us they didn’t know if the law was in effect.

Today News10NBC spoke with Irondequoit Police Chief Alan Laird, he said their department still has not received any notice from the county that the law is in effect and that they can enforce these hefty fines.