ROCHESTER, N.Y. (WHEC) — At an event Thursday night that Mayor Evans called a "progress report," he outlined his plans and accomplishments, including beginning to implement some of the housing task force recommendations. He also spoke at length about public safety saying the city has invested $8.4 million in violence prevention programs.

Mayor Evans believes in a three-pronged plan that includes prevention, intervention and violence suppression that will reduce crime. He also talked about his plans for economic growth.

The city has invested $14.5 million dollars of federal funding in workforce development.

"An unprecedented spirit of collaboration among community stakeholders combined with once-in-a-lifetime investments of federal stimulus dollars has brought Rochester to the tipping point of self-perpetuating greatness," said Mayor Malik D. Evans in his progress report on Rochester Thursday.

“Ladies and gentlemen, brothers and sisters, friends and neighbors, partners and allies: I stand here tonight with a loud and clear message: That day is coming, and it is coming fast,” Mayor Evans told an audience of elected leaders, city residents and community stakeholders. “Rochester is on the verge of becoming one of America’s truly great cities and the rest of the world is about to see it too. And the reason is simple: the people of this city are finally working together.” 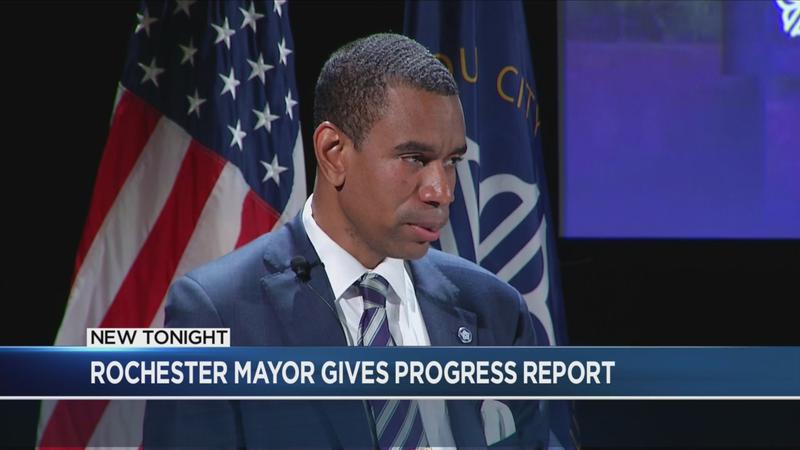 Speaking at the Theater at Innovation Square, Mayor Evans presented an audience of elected leaders, residents and community stakeholders with a progress report on his first seven months in office titled “All in for Rochester.”

He said the U.S. American Rescue Plan Act infused the Rochester region with hundreds of millions of dollars to propel the region’s growth and development.

“The entire Rochester community is ready to come together and work together, side by side, shoulder to shoulder to move this city forward,” he said.

Mayor Evans said his Administration will continue to make progress toward the future while confronting the challenges of each day.

“There’s an African Proverb that says don’t stop planting your crops because the birds are eating them,” said Evans. “That’s good advice and we’re following that at City Hall. We won’t be paralyzed by hopelessness. We don’t give in to the bankruptcy of despair.”

To further promote that cooperation, Mayor Evans highlighted some of the initiatives and programs he has launched within his six Key Priority Areas.

“I invited you here tonight to tell you where Rochester is going to be so you can join me in getting there. And not only getting there, but also join me in actually moving Rochester forward,” said Evans. “Looking back on the work we’ve accomplished since January, I have a clear image of where we’re going.”

These investments within the Key Priorities include:

• Equity, Inclusion and Justice: Embedded in all priorities; dedicates an additional $1 million to further implement the report of the Commission on Racial and Structural Equity.

“The progress we’re making on these priorities and the people I work with are the reason I come to work every day full of hope and excitement,” Mayor Evans said. “But we need your help. So let’s work together and be all in for Rochester.”