ROCHESTER, N.Y. (WHEC) — A crowd estimated at 1,500 shut down one of the busiest streets in Rochester.

It took Rochester Police about two hours to clear North Clinton Avenue Sunday night. RPD says it did not arrest anyone.

But Monday News10NBC wanted some kind of explanation as to how a situation like this can happen.

RPD said N. Clinton Avenue between Upper Falls Boulevard and Clifford Avenue was taken over by a group of 1,500 people and 500 vehicles.

RPD says bikes were doing burnouts and you can see the evidence of skid marks on the street Monday. 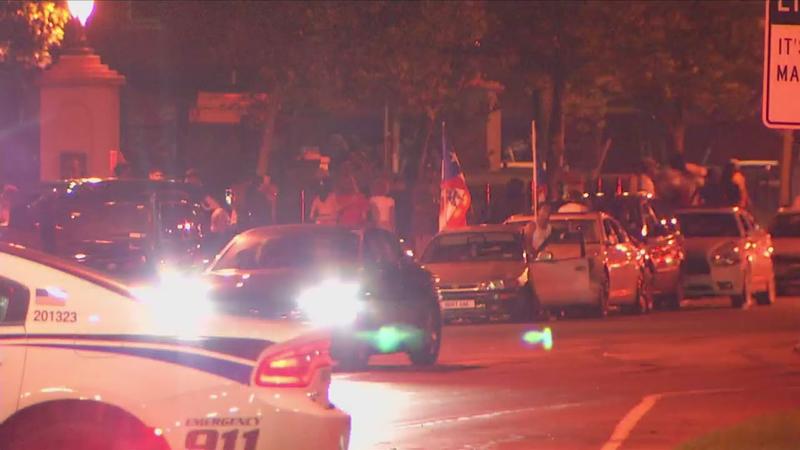 By 9:30 p.m. Sunday, the RPD cars pushed forward and cleared the street.

Story in 60
RPD says an estimated crowd of 1,500, some in cars ATVs dirt bikes and motorcycles, effectively closed down a stretch of N. Clinton Ave Sunday night.
Today the street is scared with burn-out marks.
The mayor is meeting with the chief about this at 2pm. @news10nbc pic.twitter.com/hSWKqkXkWa

I went to a news conference with Mayor Lovely Warren Monday morning wanting to talk to her about what happened.

Mayor Lovely Warren: "I know you have a question about Clinton."

Warren: "But I don’t have an answer for you yet."

Warren: "I have a meeting with the police chief this afternoon, I think our meeting is at 2. So if you want to catch me after 2, I’ll have a better answer for you. I just don’t have any information at this point in time."

While the mayor left for her meeting, I went to the neighborhood. I found a security camera video from a corner store on N. Clinton. It captured the street crowded with cars, motorcycles and the occasional ATV.

At 3:40 p.m. I received an email from the mayor’s spokesman:

"Last evening, according to the Rochester Police Department, a large gathering including numerous vehicles occurred on North Clinton Avenue." Justin Roj wrote. "RPD had no prior intelligence or information regarding this event and discovered it after it was underway. The officers on-scene managed the situation effectively and acted to deescalate the events occurring in order to minimize the risk of confrontation and potential injury to everyone present."

"Mayor Warren is grateful to the officers who responded last night for ensuring that the gathering ended peacefully and without further incident."