ROCHESTER, N.Y. (WHEC)— Rochester Mayor Lovely Warren Thursday announced the launch of a new police reform initiative, this time, it is focused on the hiring of new police candidates.

In a new conference with the Rev. Lewis Stewart of United Christian Leadership Ministry, the two announced the "Civilian Public Safety Interview Panel" which will interview any new-hire candidates for RPD, and provide recommendations to the chief.

It’s part of Rochester’s response to former Governor Andrew Cuomo’s Executive Order 203., which called on police departments across the state to develop and implement reform policies following the murder of George Floyd in 2020.

Rev. Lewis Stewart on the citizens’ interview panel. He is about to sign an agreement that puts him on a panel to select the citizens’ panel members. “This is not anti-policing. This is to make policing better,” he just said. @news10nbc pic.twitter.com/HOSh8S9nKW

According to Warren and Stewart, the panel will include roughly nine-12 people, with the city beginning to take applications for the panel in January.

As you may know, Warren will leave her position on Dec.1 as part of a plea deal on alleged campaign finance violations. Interim mayor James Smith will take over until mayor-elect Malik Evans is sworn in.

Warren said she is still the mayor and did not have to have Evans sign off on the program. 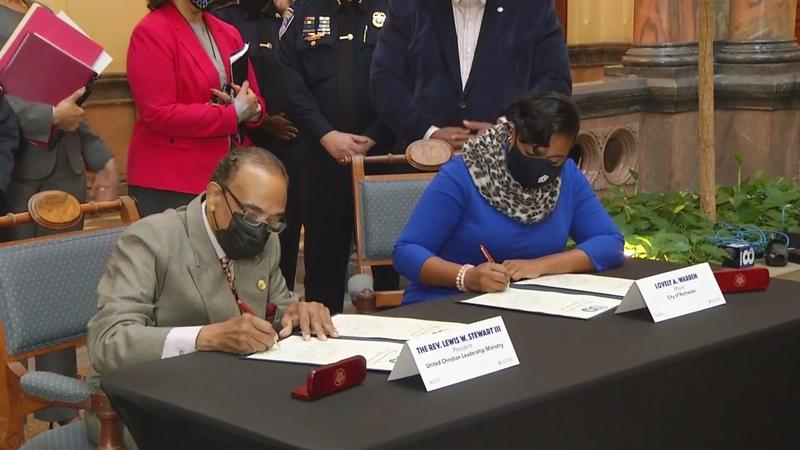 As far as what criteria the panel will look at, the two leaders broke it down:

Per the city, Stewart will sit on a three-person committee that will oversee the panel’s hiring process to do what it says will ensure credibility. The hiring committee will also include a member of the RPD and the city’s Department of Human Resources. Stewart, and the UCLM, have previously been involved in pushing for police reforms.

The reverend added panelists will have to be at least 21 years old, be trained in interviewing, will attend an "abbreviated" police academy, and cannot have a prior felony conviction. He said the total commitment will be roughly 2-3 years.

Rev. Stewart said the panelists will:
Be at least 21.
Attend a abbreviated police academy.
Be trained in interviewing.
Be committed for a period of 2-3 years.
Not have a felony conviction. @news10nbc

Stewart said the initiative is not "anti-policing", rather, it’s a move he says will make policing better.

Since the order was issued last June, Rochester, and its police department have undergone a number of changes. For starters, former Chief La’Ron Singletary was fired before he could retire in wake of the Death of Daniel Prude, for which Warren also received criticism for her handling.

Following Singletary’s firing, interim chief Cynthia Herriott-Sullivan took over and implemented a number of new policies and programs like:

Herriott-Sullivan retired in October, giving way to another interim chief, David Smith, who also outlined a list of priorities he’s implementing within the department.

Short-term goals he outlined include:

A permanent chief likely won’t be hired until next year. That hire will be made by Evans.

Additionally, the city has seen some transitions, itself, including new programs added. This includes Warren’s Office of Neighborhood Safety, which was launched in May. Additionally, the year saw the full funding of Rochester’s Police Accountability Board. The board, which is looking to fill positions, is still not accepting public complaints, but its website says it plans to start doing so in early 2022.

This is a developing story