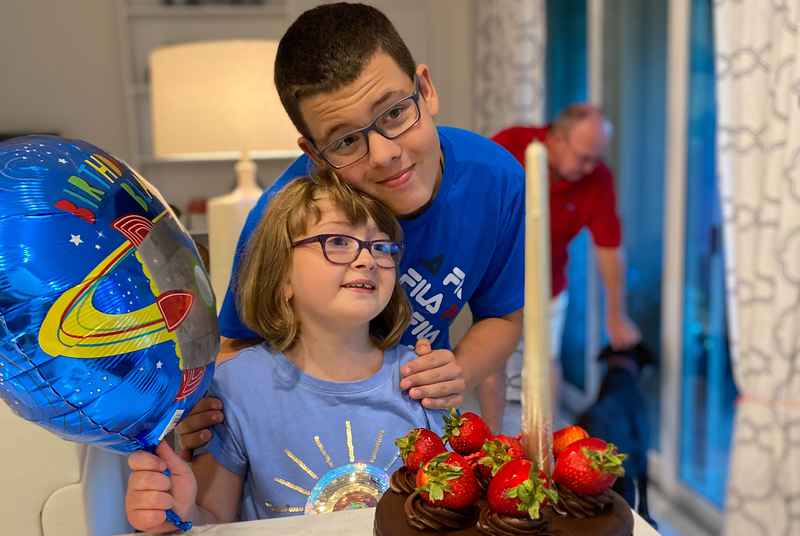 ROCHESTER, N.Y. (April Franklin/WXXI NEWS) – Daniela Castro-Martinez remembers how dedicated and active her mother was before she got sick, giving her only child a lot of attention.

“Every weekend, she’d take me to tennis tournaments. Sometimes they were like an hour, two hours away. She would do that because she knew that I loved the sport,” Castro-Martinez said. “She did everything for me and never complained about it.”

That was before Sandra Martinez was diagnosed with amyotrophic lateral sclerosis, or ALS. The disease is progressive and affects nerve cells in the brain and the spinal cord.

Martinez lost her mobility around the time her daughter started high school. That’s when the roles essentially reversed, and Castro-Martinez became one of her mother’s primary caregivers.

Castro-Martinez and her father would often alternate cooking her mother’s meals and taking care of her personal hygiene.

“I would feed her and brush her teeth, sometimes I would position her and put her into bed and everything,” Castro-Martinez said, adding that when her father was away on trips, she would have to take care of everything at their Arizona home.

Castro-Martinez, now a high school senior, is part of a growing population of youth caregivers who assist in the daily care or provide emotional support for other people living in their homes.

It’s estimated that about 5.4 million young people in the U.S. are caring for someone in their home, a number that researchers believe is greatly underestimated.

They assist in the care for disabled parents, chronically ill siblings, or elderly relatives, and their challenges and experiences vary. Some studies suggest that many have increased anxiety and depression, and for most, resources are hard to find.

For Castro-Martinez, while some of her peers worry about their Instagram likes, her high school career has been a balance between schoolwork and caregiving responsibilities. Very few teachers and classmates knew what she went through until her mother’s death in June 2021. Castro-Martinez said it was isolating at times.

“Being able to communicate with others that were in a similar situation maybe would have made me feel more hopeful,” Castro-Martinez said.

Carol Levine is a home health care advocate who has championed the support of youth caregivers for nearly two decades. She said youth caregivers have a hard time finding friends who can relate to their situation.

“They don’t want to talk about it, and they don’t get the support from their peers, which could be a good source of support if everyone understood why you can’t hang out today,” Levine said.

When it comes to supporting caregivers, Levine said the focus has primarily been on adults because some families don’t disclose what their children are doing in fear that they’d be taken out of the home.

But she said that’s not the answer.

“The answer is to provide enough support in the home, that the young person can contribute in a meaningful way, but not be responsible for the whole thing,” Levine said.

She added the COVID-19 pandemic and opioid crisis has increased the number of youth caregivers and the need to pay attention to them.

There has been very little progress in establishing policies to support youth caregivers across the globe. There are national efforts established in the United Kingdom and Australia, but recognition of children as caregivers in the U.S. is still emerging. There currently are only a handful of organizations that provide programming and services specifically for youth caregivers.

The American Association of Caregiving Youth, or AACY, is one of them. The organization has been advocating for recognition and providing support to youth caregivers since the late 1990s. Based in Palm Beach County, Florida, it’s the only one of its kind in the U.S.

“And of those, more than one in three said they were either missing school, not doing homework, and having trouble focusing,” Siskowski said.

AACY’s Youth Caregiver Project is designed to provide support both in school and at home. The curriculum is customized based on the individual’s needs. That might include tutoring, counseling, or connecting students with school supplies or food resources.
Not having a standard way to identify youth caregivers is one of the biggest obstacles in providing support. Youth caregivers remain absent from national surveys, preventing anyone younger than 18 from having access to federal- and state-funded resources.

Though it’s limited to its geographical area, AACY developed a screening tool — a questionnaire to identify caregivers in their program.

“For them to be able to kind of set the standard, I think, is important. And we look to that as we talk with people in other states to try and work with the schools because that’s where the kids are,” Siskowski said.

The questionnaire was used to identify 21-year-old Abby Gafter, an AACY graduate.

Gafter grew up in a multi-generational home caring for her disabled mother, grandmother and her great-uncle who had chronic health issues. She said she thought she was the only kid in her situation.

“I got involved with this program simply because in sixth grade in my English class, we answered a questionnaire that said, ‘Do you take care of somebody?’” Gafter said. “And they said, ‘Hey, would you like to be part of this program where there’s other people who deal with the same things you are?”

Gafter stayed in the program for six years. She was provided a tutor and participated in special events with other caregivers. She said counseling and social-emotional support is what she valued most.

“They would take out one period of class, you know, twice a month, and they would just kind of (ask), ‘How are you guys? Is everyone OK? Do you need help? Did you guys need anything?’ And usually the answer was no, but when you needed help, they were there,” Gafter said.

Each participant is paired with a staff member who does regular home visits and is responsible for connecting students with supportive resources.

Gafter said her appointed worker connected her with a hospice counselor to help her grieve during her uncle’s health decline and eventual death.

“If it wasn’t for AACY, saying, ‘Hey, I want to connect you to these people,’ I never would have continued that connection that I still have,” Gafter said. “So I find them responsible for a lot of the connections I have.”

AACY reports about 90% of its participants remain in the program through graduation.

There are barriers that make it difficult to repeat this model outside of Palm Beach County. The district is one of the largest in the country, and many schools don’t have the staff or resources to implement a youth caregiving program.

The program serves about 500 to 600 students in 30 schools each year.
Cultural differences and the overall stigma can make the program a hard sell when parents are the gatekeepers. Students can only participate with permission from their parents.

Siskowski said it takes building trust with some families.

“A lot of our families are out of (immigration) status. And so they have that extra layer of fear. Plus, in some families, there’s the fear of the children being taken away,” Siskowski said.

The school district doesn’t track students in the program, which makes measuring the success of the program difficult.

AACY measures its effectiveness based on graduation rates and gathering feedback from students at the end of each year. They also look at how many students advance to the next grade versus being held back. Siskowski said in 2021, rates fell slightly, a drop she says is due to the pandemic and challenges with virtual education.

She said they have started an alumni group, but they don’t currently have formal statistics yet. Nearly 2,000 children have gone through the program since it began.

Even on its small scale, the program has been well-received by the caregivers and their families.

Alina Rogazon says it’s helped her son David – a 14-year-old caregiver for his sister, Rania, who was born with congenital heart disease – by giving him outlets outside of his home responsibilities.

“For a few hours, they were able to be kids. That’s amazing,” Rogazon said.