ROCHESTER, N.Y. (WHEC) – Rochester Police Officer Tony Mazurkiewicz was 54 years old. He was a 29-year veteran of the force and a member of the Tactical Unit. The husband and father was gunned down while working undercover on a murder investigation.

It was 9:15 on Thursday night. Officers Tony Mazurkiewicz and Sino Seng were sitting in an unmarked minivan on Bauman Street.

"A male approached the surveillance vehicle from behind. While cowardly secreting himself behind large shrubs, he fired approximately 17 rounds into the officer’s vehicle from about 10 to 15 feet away," said Major Crimes Unit Captain Frank Umbrino.

Officer Mazurkiewicz was in the driver’s seat and hit twice in the upper body. Officer Seng was shot in the leg. Both were rushed to the hospital. The minivan they were sitting in was riddled with bullets.

"Despite having just been shot Officer Seng was able to exit the vehicle and returned fire at the suspect," said Umbrino. "The suspect was not shot."

The officers weren’t the only ones shot. 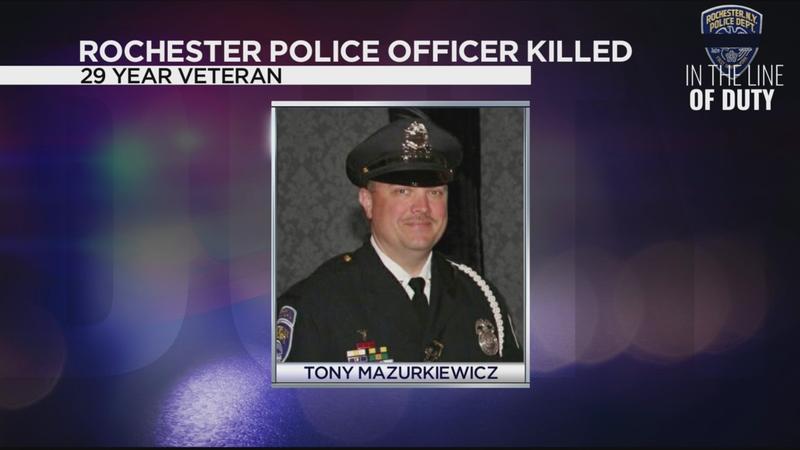 "A 15 year old female was inside her house nearby and as she dove for cover after during the gunshots, she was grazed by one of three bullets to penetrate one of the walls of her house," said Umbrino.

Law enforcement from every local jurisdiction in Monroe County converged on the scene. Within an hour of the shooting, Kelvin Vickers, 21, was found hiding in a crawlspace on the second floor of a vacant home with a gun nearby.

"Preliminary testing at this time has indicated that this weapon used was the weapon that killed Officer Mazurkiewicz, shot Officer Seng and the 15 year old girl." Umbrino said.

There’s a lot more to this story that RPD can’t talk about yet because this investigation isn’t over. Here’s what we can tell you. With the help of local, state and federal partners six search warrants were executed across the city as part of this investigation. Nine firearms were recovered including handguns and assault style rifles, along with hundreds of rounds of ammunition and nearly 100 pounds of marijuana.