ROCHESTER, N.Y. (WHEC) – A local business is bouncing back after it received a hate-filled homophobic letter. Crisp Rochester, had its first event Saturday, celebrating pride week.

Owners of Crisp Rochester, Wendi and Valerie Loyet, hosted the event, despite receiving an anonymous hate letter during Pride month in June.

"So much good came out of something crummy, it’s overwhelming how much love and support we got,” Wendi told News10NBC during the restaurant’s pride event, giving a new vibe to the city’s South Wedge.

"The city has been incredible. Just the Rochester area really, from the east side to the west side, people have come in saying they’re in because they want to support you,” Valerie said.

Wendi and her wife Valerie both said they’re no strangers to hate mail. “This is not my first hate letter in my lifetime,” Wendi said. The letter they received in June, was paired with a bible. Parts of it read, "Your gay lifestyle is evil.” Wendi says once they posted it on social media the community was outraged, and supporters started piling in. 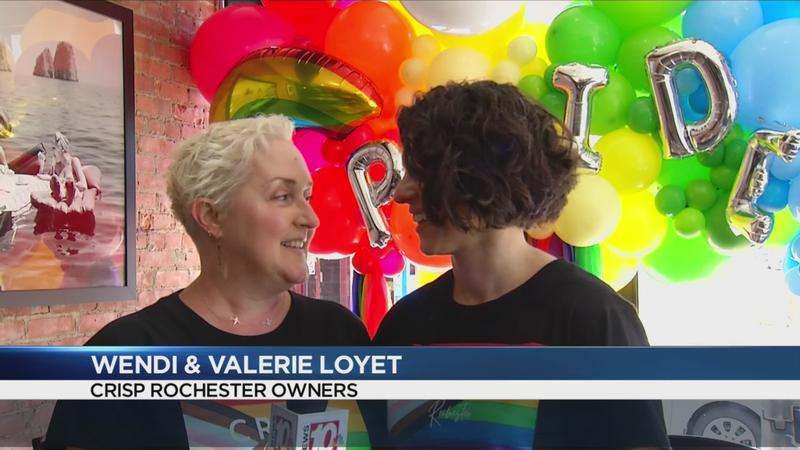 "People not even just eating, just stopping by to say we love you, we support you, we’ll be back for dinner tomorrow.”

Continuing to be part of pride week is something the pair is looking forward to, and no matter what the occasion, they’re ready to make their mark in the flower city.

"We do dinner parties, bridal showers, anything you can dream up, we can do it and set up a menu for you.”

Wendi says Crisp will be decked-out in pride decor all week. As far as the letter, the couple says they’ve filed a police report with the Rochester Police Department.