ROCHESTER, N.Y. (WHEC) — Monroe County Executive Adam Bello is defending the Seneca Park Zoo following a News10NBC investigation into animal welfare and staff training concerns. Over the past several months, two separate outside inspection teams have found issues ranging from the care being given to certain animals, the facilities in which those animals were being kept and the training or lack thereof of certain staff members.

USDA inspectors cited the zoo for 10 issues including the mishandling of a situation that resulted in a lion escaping its primary enclosure and the birth of a snow leopard. The animal welfare complaints were corrected at a follow-up inspection. The Association of Zoos and Aquariums (AZA) also conducted a 3-day inspection following the lion escape and issued a 16-page report last week highlighting serious issues, primarily with management and personnel.

The AZA’s report ends with this conclusion, “While we did not find any systemic animal welfare concerns at this time, the other findings from our special inspection are serious and concerning. The toxic work environment coupled with poor communication among staff at all levels and a lack of clear definition of staff responsibilities, reporting structure, and accountability, all contribute to frustration and mistrust among staff. Additional weakness in facilities maintenance, safety protocols and emergency training further exacerbate the problems and have led to current conditions where Seneca Park Zoo is susceptible to major safety and animal welfare lapses.”

Adam Bello – My administration has inherited a number of issues that are related to the culture among staff and around procedures and policies. We took the step over a year ago, to bring in a new zoo director who has been working to fix those issues and go through systematically to make sure that we have nothing but the best zoo in the country… We asked the AZA to investigate following the incident with the lion, when something isn’t working right you go to that agency that provides that oversight and ask, “how you can do it better”, that’s what we did…We take those responsibilities very seriously that’s why we brought in a new zoo director and that’s why we’re going to continue to make improvements there. 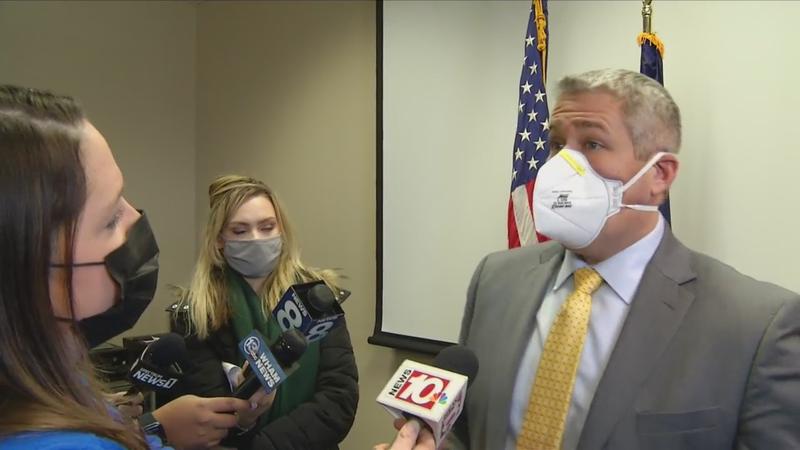 Jennifer Lewke – Some of the stuff they found was pre-existing, (it) had been long-standing policy but the report also says that there are issues that continue or that remain at the zoo to this day, much of it is about the people, and the interactions between the people, less about the animals it seems…so, how do you or does your zoo director change the culture there?

Adam Bello – So, there’s a few different things first of all we brought a new zoo director in from out of town so, it’s a new individual who came here from Texas with a lot of experience working in large organizations, larger than a Seneca Park zoo…and then again it’s going to take a lot of training, it’s going to take a lot of working with the staff, working with the society, there’s so many partners that are involved at the zoo.

Jennifer Lewke – In these reports it says that nobody really knows who to complain to because there are so many tentacles?

Adam Bello – That’s why we brought in the new zoo director because we felt the same way, I felt the same way when I took over, I didn’t think the model of having the parks director also serving as the zoo director was a good idea…These things do take time though, deep culture issues have festered for years and years, they’re always going to take time to resolve but we’re working through those and I have confidence in the team and I think the public does as well. It’s my responsibility as a county executive, to… if you see something that’s not working well, it’s to roll up your sleeves and try to fix it that’s what we did.

Jennifer Lewke – Are you confident that you’ll hang onto that AZA designation?

Adam Bello – I’m confident in our team and the fact that we’ve reached out to the AZA because that designation is important to us and we’re going to continue to work with them.