ROCHESTER, N.Y. (WHEC) — The results of a USDA inspection at the Seneca Park Zoo have some county lawmakers interested in forming a committee to look into animal welfare concerns and employee training practices.

On Thursday, a News10NBC Investigation detailed 10 citations issued to the zoo by the USDA following an inspection in September of 2021.

The inspection happened after a female lion escaped her primary enclosure during operating hours sending the zoo into lockdown. Monroe County reported the incident to the USDA at the time and shortly after the Zoo’s veterinarian Dr. Louis DiVencenti also filed a complaint, unhappy with how the facility was operating. A combination of those two complaints likely triggered the unannounced inspection that turned up the citations.

As News10NBC detailed on Thursday, one of the citations was for the lion’s escape and how it happened, another was because the lethal force team that was activated by the escape wasn’t properly trained to handle it.

The inspection report also highlighted issues with the birth of a snow leopard cub. Instead of leaving the mother and cub alone for the first 24 hours of life to try to prevent maternal rejection, staff didn’t follow the orders of the veterinarian and checked on it 6-7 times in a 7 hour period, according to the report. The cub was rejected by its mother and became sick, requiring hospital care. 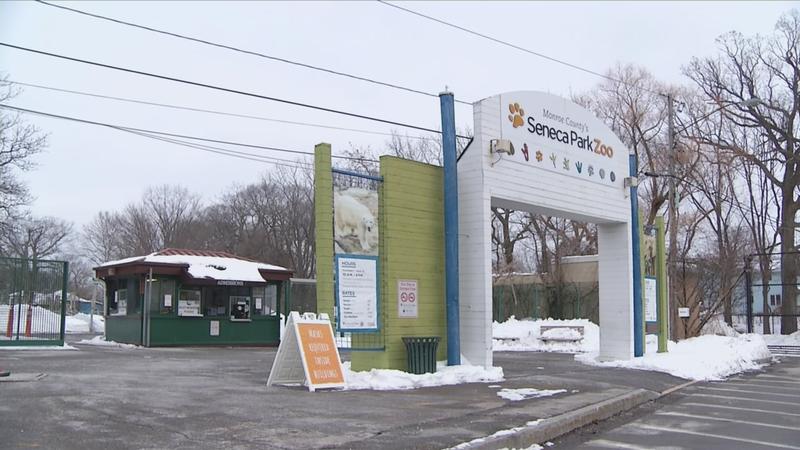 “There’s always going to be something that doesn’t go right,” Monroe County Executive Adam Bello told News10NBC on Thursday, “the response or our responsibility though is to acknowledge that, is to investigate what happened and then make sure incidents like that never happen again so that’s what we’ve been doing…we took every action to make sure that those animals are well taken care of and we acted on the recommendations that they gave us and right now there are no deficiencies at the zoo at this point from the USDA.”

Dr. DiVencenti was fired by the county on Wednesday. On Friday, he told News10NBC Investigative Reporter Jennifer Lewke, “I felt ethically obligated to make a report after my concerns regarding Animal Welfare Act violations were not addressed.”

County Executive Adam Bello refused to answer questions about Dr. DiVencenti’s firing, “I don’t comment on personal issues like that, it wouldn’t be appropriate.”

At least some county lawmakers want more information than that, “the timeline could not be clearer – long-time and respected Seneca Park Zoo veterinarian raises concerns about operational and leadership deficiencies to Bello Administration, reported concerns progress into serious, and potentially deadly, animal welfare and human safety abuses within the Zoo, which are verified by the United States Department of Agriculture, and Dr. Louis is fired,” Legislature President Sabrina LaMar said in a statement, “the Seneca Park Zoo is a beloved community staple – our community deserves answers from County Executive Bello as to what is occurring and has occurred behind closed doors at the Seneca Park Zoo – a taxpayer supported facility.”

If sufficient transparency and answers are not provided in regard to situation, LaMar says under her authority, she will “consider the formation of a Legislature Special Committee on the Seneca Park Zoo for the purposes of investigating the alleged, and confirmed, wrongdoing at Seneca Park Zoo including animal welfare and human safety abuses, potential retaliation against a whistleblower County employee, and the overall current operations of Seneca Park Zoo. If necessary, the Legislature and any potential Special Committee, reserves its right to subpoena information it deems essential to completing its duties.”

In response, a Spokesman for County Executive Bello said on Friday, “This community is tired of the petty partisan politics we have seen the past two years from the Republican majority in the Monroe County Legislature. Today they are at it again with a misleading and denigrating release about the Seneca Park Zoo. Here are the facts: The county requested that the United States Department of Agriculture (USDA) as well as the Association of Zoos & Aquariums (AZA) inspect the Zoo following an incident last September, where a lion gained access to a keeper corridor. The USDA inspected the Zoo and delivered a preliminary report for the county to begin taking action on. In the interim, on November 1-3, 2021, the AZA was on-site for the inspection requested by the Zoo. The Zoo has not yet received a report from the AZA. The USDA report details several issues, including training and response regarding the lion incident and not following protocols regarding birth management of the snow leopard cub. The county immediately rectified the areas of concern. On December 17, 2021, the USDA visited the Zoo for a Focused Inspection. The Focused Inspection found no deficiencies, concluding that the Zoo had rectified the citations. On January 5, 2022, the Zoo received the revised USDA Inspection Report, which reported several citations that were corrected as confirmed by the December 17th inspection. The Zoo is in compliance. In fact, the county has a history of clean USDA inspection reports as recently as May 28, 2021. The Zoo is a community gem and the welfare and health of the animals is paramount. Following the lion incident, we initiated and invited both the USDA and the AZA to inspect our premises and procedures as we welcome the opportunity to improve and ensure the welfare of our animals and guests. To play politics with the Zoo — and tarnish its reputation to score a political hit — is beneath even this already tarnished Republican majority.”

As for how the rejected snow leopard is doing, the zoo says “ultimately, it’s unclear on why the mother abandoned the cub. This was not her first litter of cubs, and she has a history of abandoning her newborns. The zoo staff did not physically enter the cub’s area, but observed via a surveillance camera in an adjoining area. There are multiple reasons for snow leopard mothers to abandon their cubs and it’s impossible to say for certain what the reason was. As for any long term impact on the cub — as adults, snow leopards are solitary in their natural environment. Now that the cub is in its adolescence, living without his mother is a natural behavior. He is a well-adjusted snow leopard, and is an asset to the population of snow leopards in zoological settings.”