ROCHESTER, N.Y. (WHEC) — What impact did COVID and hybrid learning had on the choices parents made?

News10NBC went through the state’s data and we found the virus and remote learning played a role in driving thousands of families away from their public school. 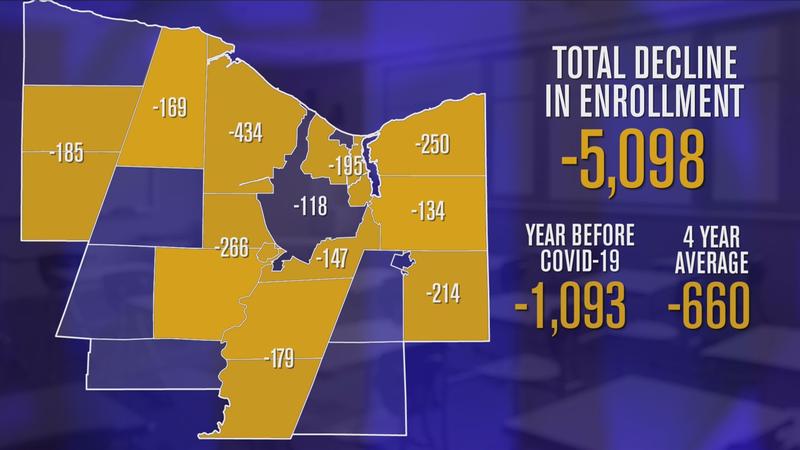 Jane Huntley gets her daughter and son after another full day of school in a classroom. Quinn is in fourth grade. Brady is in first grade.

In the summer, after public schools unveiled hybrid plans, the Huntleys took Quinn out of Fairport schools and enrolled her with Brady at St. Joe’s.

"It’s not anything to do at all with the public school other than they couldn’t accommodate a five-day-a-week program and that’s all the difference in the world for us right now," Garrett Huntley said at the family’s kitchen table in Perinton.

Based on data from the New York State Education Department released in late January, the enrollment decline in Fairport schools this year was 214 students.

"Let me get down to them, they’re down stairs," Jennifer Regan said as she walked through her home in Brighton while we were on a Zoom call.

This is where she chose to homeschool her children. Her son is Owen.

Regan turned her phone towards her daughter.

"And then Zoe is over here," she said.

Regan says she pulled her children from public school out of fear of COVID and Brighton’s hybrid model. She remembers what it was like last spring.

"You could just see it negatively affecting them," Regan said. "I would say by August we knew we didn’t want to send them back into a public building with a bunch of children and students. We were a little too worried about that."

The data from NYSED shows Brighton’s enrollment decrease this year is 147.

Of the 18 school districts in Monroe County, 11 lost more than 130 students.
The total decline in enrollment in public schools in the county is 5,098.

Click here to find the enrollment in your school in the 2019-20 school year.

Click here to find the enrollment in your school in the 2020-21 school year.

No district was hit harder than the Rochester City School District which was 100% remote until February.

That’s 9% of the student body.

"It was a real struggle for our kids," Katie Stubbe said.

Stubbe moved her children out of their city school to St. Ambrose Academy in Irondequoit. The decision came down to remote learning and what they experienced last spring.

"It just wasn’t a good situation with the relationships with each other and it was negative for our kids’ emotional and mental well-being," she said.

Brean: "Are you concerned about this drop in enrollment?"

Kathy Graupman, Greece School Superintendent: "So this year has been a unique year. I’m not really worried about that because when I look at enrollment this year, out kindergarten numbers are extremely low."

Kathy Graupman is the superintendent in Greece and, as the chair of the county’s school superintendents council, she speaks on school issues that affect every district like this one.

She says enrollment is down because families delayed kindergarten, went to private school or homeschooled.

Brean: "Would you agree though, that the decrease we saw this year as compared to other years is a sign that parents just aren’t happy with the hybrid-remote model?"

Kathy Graupman: "Well I think it’s a sign of families struggling to figure out how to manage their life. All of us have struggled around the pandemic around how do you navigate child care for two days a week or three days a week within this hybrid model."

Brean: "Are you worried that the children won’t come back who left this year?"

That’s the question — Do the students come back?

In Fairport, the Huntleys say they’re out.

"Without a doubt, it’s one of the best decisions we’ve made," Jane Huntley said.

"If medically we get the vaccine and the numbers are really great we do want to send them back to school," she said. "We would like them to have the public school experience."

Harley School’s enrollment is up.

Watch the video in the player below to meet a family that chose Harley over remote learning.

We wondered about the financial impact of losing students. If schools lose students, do they lose money?

It’s possible they could lose some transportation and building money if they weren’t used.

But there’s a law in New York that protects the major state money called foundation aid. The schools call it "save harmless."
It says if schools lose students, they don’t lose foundation aid.

Watch the video in the player below to get an explanation from Brian Cechnicki, executive director of the Association of School Business Officials.