ROCHESTER, N.Y. (WHEC) — Last month, a Rochester man was denied a liquor license for a natural wine store he wants to open in the South Wedge neighborhood of the City.

The three commissioners at the New York State Liquor Authority said a nearby liquor store already had organic options and they didn’t think there was a big enough demand for the added competition. As the would-be wine company owner awaits his appeal, his bigger concern was how the commissioners were treating people who want to open or expand businesses in New York.

The NYS Liquor Authority streams all of its hearings online. News10NBC Investigative Reporter Jennifer Lewke spent hours going through some of the most recent ones and let’s just say, the Rochester entrepreneur wasn’t the only person who left feeling disappointed and disrespected.

Brandon Opalich and his wife invested their savings to remodel a small shop in the South Wedge and open Aldaskeller Natural Wine Company. They paid nearly $2,000 to apply for a license to sell wine at the shop and waited for 9 months for a hearing in front of the New York State Liquor Authority’s three appointed commissioners.

The hearing took place on Feb. 16—here’s an excerpt: 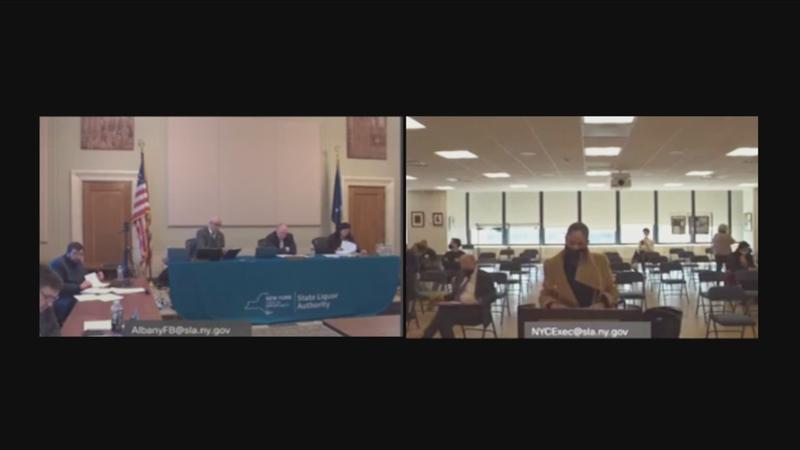 Opalich’s Attorney: Maybe not but I believe respectfully, that’s for the applicant to endeavor.

Chairman Bradley: That is but here’s what happens regularly when people come in here and tell me they’re going to only serve organic and natural wines, they figure out pretty quickly that it’s not economically feasible and then they come back and they want to be a full-blown liquor store and at that point I got a shut them down.

When Opalich tried to explain his local market research…

Chairman Bradley: We are familiar with the natural wine world, it’s been in New York City much more expansively than it has been in Rochester for probably long before I ever sat here.

Opalich’s application for a permit was denied by all three SLA commissioners. “I was very disappointed in the New York State Liquor Authority’s demeanor, I felt that they had made up their decision on my application before I even got there. I felt disrespected,” he tells News10NBC.

He’s not the only one. A woman looking for a liquor license for a New York City Bar had the following exchange with the commissioners:

Chairman Bradley: Where did you get the $700 from for the furniture inside that the old owner sold you?

Chairman Bradley: And I’m assuming you had to pay a security deposit with that as well?

Chairman Bradley: What did you do for work before this?

Chairman Bradley: What makes you want to get into this business because you have no experience in it?

Woman: I’m just trying to venture out, I’m trying to make it happen for me and my family

This woman was denied, the commissioners were suspicious she wasn’t truly the person who would be running the bar.

In another case, they chastise an attorney and business owner for not checking with a neighborhood group about their application for a DJ permit when the law didn’t require them to do so.

Chairman Bradley: So, you’re telling us, you basically purposely didn’t go back to the community board?

Attorney: The statute doesn’t require notice in this case.

Chairman Bradley: I didn’t ask you if it required notice, I know it doesn’t.

Things went from bad to worse for this applicant when the Commissioners found out they had already been having people play Spotify playlists from an iPad, which the state considers DJ’ing.

Commissioner Fan: We just asked you and you said you don’t use DJs but it’s all over your page.

Chairman Bradley: You just lied to our face. I can’t handle this, it’s insane… I hope your lawyer wasn’t also directly lying to us like you are because that would certainly determine my view of his credibility going forward.

This application was denied too and then, Commissioner Lily Fan was caught on a hot mic saying this, “How do they just lie, I know… It’s like did I just… We’re like. We’re living in a box or something? Like what the f**k?”

News10NBC reviewed the last several meetings of the NYS Liquor Authority and there are dozens of other contentious examples.

“Why a state-run agency is allowed to treat small business people, that have risked a lot during a pandemic to start or create more business for the state, I found it absolutely perplexing,” Opalich said.

In regards to the denial of a license for Aldaskeller, a spokesman for the SLA tells News10NBC, “the unanimous decision to deny this application was based solely on the rigorous standard required under the law for new liquor store applications and consistent with prior decisions, with each commissioner explicitly stating the proximity to existing stores as the basis for their decision.”

As for the tone and tenor of the Commissioners during these hearings, he says, “as SLA Board meetings are where the most controversial matters are decided, with the Board hearing live arguments from both applicants and from the opposition, from time-to-time tensions arise over the issues and naturally opposing perspectives. The SLA and its Board treat all who come before them with proper dignity and respect; reporting on a couple remarks, taken completely out of context during a four-hour meeting, is not a fair representation.”

About 90% of licensing decisions are made at the staff level but all applications for liquor stores are placed on the Board agenda. The law enacted for liquor store applications is different from all other applications because applicants have to meet an affirmative burden of proving public convenience and advantage. It is up to the three board commissioners to determine whether they so.

Opalich said all of that may be true—but the Commissioner could and should act in a more professional and respectful manner.

“Who is holding the SLA accountable for this type of behavior? Our elected officials should not be pleased with the way the SLA chooses to treat these applicants,” he said.

On Tuesday, Gov. Kathy Hochul announced plans to overhaul the New York State Liquor Authority. She said she wants to modernize the agency and streamline the application process for would-be owners. She’s adding 39 new staff positions to help expedite application review and says she will be convening a panel to discuss updating the state’s 100+-year-old liquor laws.