ROCHESTER, N.Y. (WHEC) — The number of calls to the Upstate Poison Control Center for children who ate marijuana edibles has quadrupled, and one of the reasons is that some of the edibles are packaged to look like candy.

I bought one package called "Nerdy Bears." The clerk at the local store told me it was powerful enough to knock him out. The package says it contains Delta-8 THC which was made illegal to buy and sell in New York State this year.

I bought another package called "Errlli Sour Terp Crawlers." The package says it contains THC, which is legal to possess and consume but not yet legal to buy or sell in New York. 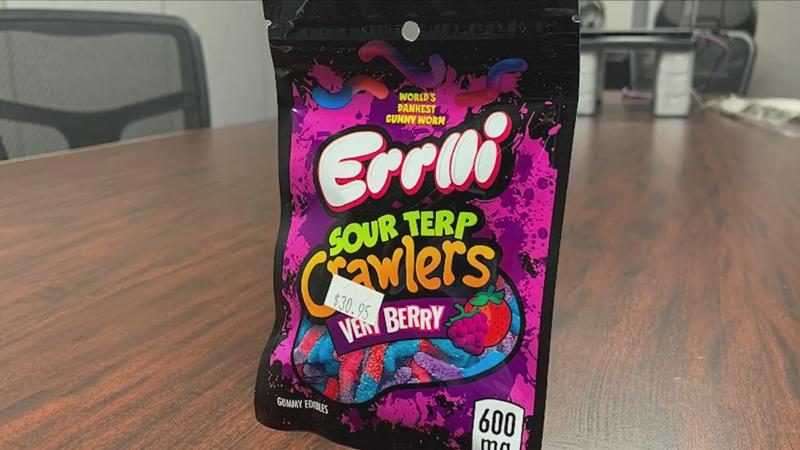 This is the kind of stuff children are finding, eating and ending up in the emergency room.

"We have needed to admit a number of young children — toddlers and pre-school-aged children — who’ve accidentally gotten into these candies," Dr. Elizabeth Murray said.

Dr. Elizabeth Murray is a pediatrician and most of her work is spent in the emergency department. She says the problem is packaging that looks like candy, left in the open.

"Then a very curious young child, which is how they are, coming across it and thinking — this is too good to be true! There’s an open bag of gummy bears. If I just take one or two, nobody will notice," Murray said.

Brean: "So when the children end up in the hospital can you describe what they’re going through, the impact on them?"

Dr. Murray: "They’re very confused. Their parents are very concerned. They’re wondering what is going on."

Dr. Murray says her latest case was two weeks ago.

The New York State Attorney General issued a warning about this in October and directed people to file complaints if they found edibles containing THC using this form.

Dr. Vince Calleo, Upstate New York Poison Center: "From 2019 until now, we’ve seen the number of calls to our poison center for edible products more than quadruple over that period of time."

"The reality is we need to be treating cannabis just like we would any other substance," he said. "You wouldn’t leave an open bottle of vodka on the coffee table if you’ve got kids running around."

Vanderwalle said when the state comes out with its rules and regulations next year, he believes they will not allow cannabis products to look like candy.

He and Dr. Murray would like people to think about buying a medical lockbox.

So what’s legal and what isn’t?

We wanted to understand what is and is not legal when it comes to cannabis in New York State. That’s why we talked to Vanderwalle.

"Right now in New York we are in this weird, grey, wild west market," he said. "It’s legal to possess and it’s legal to consume cannabis in New York but it’s not legal to buy or sell."

The product called CBP is legal and New York legalized marijuana this year, but only to possess and consume.

The first time the state’s marijuana regulation board met was in October. They still have to figure out the rules on everything from who grows it to who sells it.

Brean: "When does everything become legal? Is there a date for that?"

Vanderwalle’s guess is late next year.

I showed Vanderwalle the products I bought. Despite the packages indicating chemicals and property that make it illegal to buy and sell, like Delta-8 and THC, my receipts show Monroe County and New York State collected sales tax on the purchases.

"This is a big problem right now for not having defined regulations — you have no idea what’s in that package," Vanderwalle said. "You realistically could have bought candy that has nothing in it put it in this bag that says THC and sold it for 10 times the price and it would never be traced back to anyone."

Towns and villages in New York State have until the end of the year to decide whether they want legal marijuana businesses and lounges in their municipalities.

Click here to find what your city, town or village has decided.

State Senator Jeremy Cooney (D, 56) is an advocate for the legalization of marijuana in New York.
I asked him to bring up to speed on where the process is.

Have Regulators Been Named?

Is there a date to apply for a license?

The OCM is working hard to expedite the creation of regulations to establish an application process; however, there is not a date for when the Office of Cannabis Management (OCM) will begin accepting applications for licensure. This is something I’m pushing hard for in the new year. We can’t wait.

Is there a date when buying & selling of cannabis will be legal?

We will first need to set up the"supply" of legal, recreational cannabis before it will be possible for retail operations to sell adult-use cannabis products. In hopes of accelerating the start of the legal market, I submitted legislation that would allow for growing to start immediately on a provisional basis. There is currently no date established when cannabis transactions will be legal. According to OCM,

"The regulatory framework outlined in the MRTA is currently under development and will require input from communities and stakeholders throughout the state. The Office of Cannabis Management needs to draft and issue regulations to implement the law before adult-use sales can begin."