News10NBC Investigates: RG&E hitting customers with $100 fee even if they follow the rules

Editor’s Note: Since this story was published, the $100 fee was removed from Nicole Bruce’s after RG&E completed its inspection, just like it promised. "I was glad I didn’t have to call and dredge through that again and that they did what they said they were going to do," Bruce told us.

ROCHESTER, N.Y. (WHEC) — RG&E is mailing hundreds, maybe thousands of certified letters, warning homeowners that if they don’t get their indoor gas meter inspected, the company is going to hit them with a $100 "no access" fee.

But News10NBC found the utility company is charging the fee on homeowners who are trying to follow the rules.

To find the number to file a complaint, scroll to the bottom of the story.

RG&E is only supposed to charge $100 if people refuse to allow inspectors into their homes. We found customers who got the warning letter, scheduled an inspection but got hit with the fee anyway. 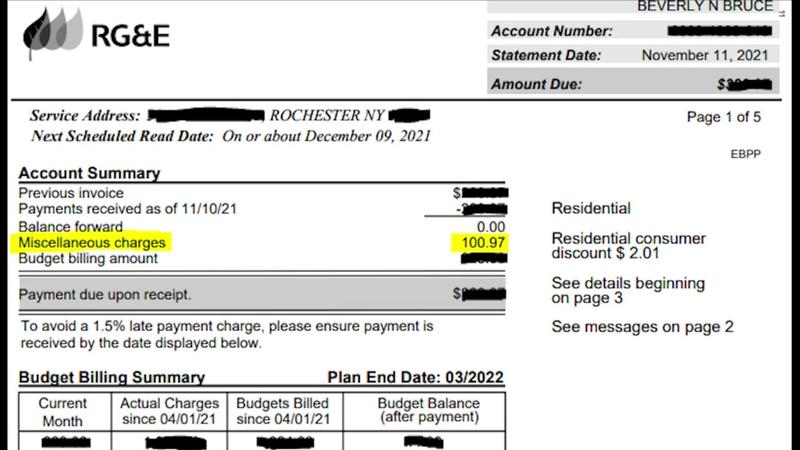 That’s what happened to Nicole Bruce in Greece.

Bruce: "I had scheduled the appointment and they still sent me the certified letter and charged me."

On Bruce’s bill, it shows up as "miscellaneous charges" $100.97 is the exact charge.

Bruce said it took two weeks of calling to set up an appointment and she booked one a month out.

Bruce: "And then maybe three or four days later my new bill came out and the fee was charged."

In Gates, Carrie Morriss says she got the RG&E warning letter and tried for three weeks to schedule an appointment.

Morriss: "We tried to do the right thing. We tried to make our appointment but nobody got back to us and now we’ve got a $100 fine on our bill."

Gary Miller got the certified letter at picked it up at his post office in East Rochester.

Miller: "The postmaster said we’ve had 265 of these letters that came in on Saturday."

The Public Service Commission said the safety inspections protect the home and neighborhood. But since 2017 it says it’s allowed RG&E "to assess a no-access fee of $100 if a customer refuses to allow the utility access to inspect its meters and pipes at reasonable times."

Miller said he’s scheduled at least three appointments this year and the inspectors never showed up. The most recent was Monday.

Brean: "So Carrie, you got the letter. You tried to set up an appointment."

Morriss: "That is correct."

RG&E said the inspections are mandatory. In a statement emailed to me, it says "any customer who is charged the $100 fee will have it refunded via bill credit after their safety inspection is completed."

When Nicole Bruce said she called RG&E to ask about the $100 charge on her bill she says they told her to "short pay" the bill.

"And they told me that’s what they were telling all of their customers to do," Bruce said. "Just short pay the bill."

Bruce said the RG&E customer service representative told her short paying means paying the entire bill except for the $100 charge.

The PSC said if you have a complaint about the process you are "strongly encouraged" to contact the PSC. The number is 800-342-3377.

"We are aware of isolated instances when an inspector has missed a scheduled inspection. We are addressing this situation with our contractor to ensure timely completion of scheduled appointments," the RG&E statement said.