News10NBC Investigates: What happened to Daniel Prude the first time he was at Strong Hospital?

ROCHESTER, N.Y. (WHEC) — Hours before Daniel Prude stopped breathing in Rochester Police custody, he was at Strong Memorial Hospital. Records show he was discharged in less than four hours.

Since we learned about Prude’s death two months ago, we’ve pored through hundreds of emails and reports. Last week, News10NBC uncovered new police video of Prude near Buffalo. It helped explain what happened before his deadly encounter with Rochester Police.

Now, News10NBC has an internal email to help us understand what happened that first time Daniel was at Strong. 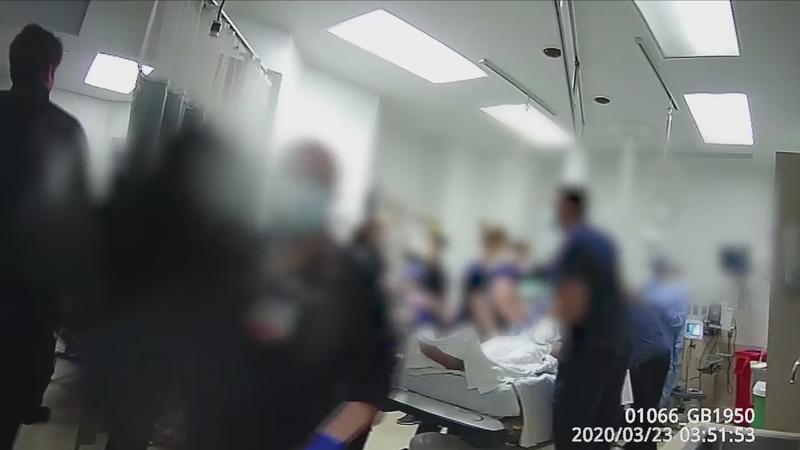 Prude was at his brother’s house on Child Street. He arrived in Rochester from his home in Chicago just a few hours before. His brother, Joe, called 911, asking Rochester Police to take Prude to the hospital. The RPD body cameras were recording.

"Don’t let them kill me, please. Please, Lord!" Prude said as police were handcuffing him before taking him out of the house.

The University of Rochester Medical Center (URMC) says it cannot talk about the specific care Prude got because his family has not signed the privacy waiver. But we have an internal email that describes part of what happened when Prude was here.

The email is dated March 24, the day after the incident between the RPD and Prude. The email was written by former Monroe County social worker Kimberly Butler to Stephen Boily with the RPD. It was included in the thick binder of documents released by the mayor’s office in September.

News10NBC asked to talk to Butler through an intermediary, but we were told she could not talk on the advice of her attorney.

The email begins, "I got this info from Strong on Daniel Prude." It says Prude came to the hospital because of intoxication but that he was "improving."

At 9:31 p.m., Prude was moved to CPEP, the hospital’s Comprehensive Psychiatric Emergency Program.

The email says he "had an entirely normal mental status exam, showed no signs of psychosis, mania or intoxication at that time." It says he was not "suicidal" or "homicidal" and that he "requested discharge."

State law says a hospital cannot force a patient to stay if they ask to leave. So, at 10:51 p.m. Prude left the hospital.

At 3:22 a.m., Prude was in police custody on Jefferson Avenue. He was not breathing and did not have a pulse. He would die seven days later when his family took him off life support.

"They discharged him as being fine and dandy," attorney Don Thompson said. "He didn’t have any problems."

Thompson is the attorney for Prude’s father, brother, and sister.

News10NBC Chief Investigative Reporter Berkeley Brean: "I’m wondering if there were opportunities prior to 3 a.m. on March 23 to help Daniel?"

Thompson: "Yeah, well, I think the first opportunity was obviously that first trip to Strong."

Strong did not provide anyone to talk on camera, but the hospital says it stands by its care, calling it "appropriate" and "compassionate." The hospital says it would never discharge someone acting in the way Prude is seen in the police videos before and after his stay at Strong.

The hospital also says the effects of PCP, which Prude’s autopsy showed was in his system, can wear off quickly.

Even Joe, Prude’s brother, recorded on RPD body camera video after he called 911 a second time, says Prude was fine when he got back from Strong Hospital.

"When he got back here from Strong, he was decent," Joe is heard telling the officer on the body camera video. But a minute later in the police video, Joe voices disbelief.

"When the doctor called me and told me they released him, I’m saying how are you going to sit here and say you’re going to release him when he was (inaudible) telling he was going to hurt himself?" he said.

Thousands of people are taken to Strong Hospital every year because of a mental health crisis. Between July 1, 2019, and June 30, 2020, 8,983 people were patients in CPEP at Strong Emergency.

URMC data says 7,350 were "treated and released." URMC says most of those 8,983 patients either brought themselves to Strong, called 911 themselves or had their family or school take them.

URMC also says between March and September 2020, 3,471 people were taken by police in a mental health transport to Strong Emergency and into CPEP. That’s 18 people a day.

The data shows 64% of those patients were admitted. Prude was not. His total stay at Strong Hospital was 3 hours and 21 minutes.

Brean: "That strikes people as not a very long time. How does it strike you?"

John Hogan-Trinh: "It strikes me as consistent with my experience."

Thirteen years ago, in his hometown of Elmira, Hogan-Trinh was at an emotional breaking point. Like Prude, Hogan-Trinh went to CPEP at the Elmira hospital. He was discharged in less than three hours. He says he attempted suicide hours later and was taken back to the same hospital.

Brean: "When you were in the hospital, is there something you think you could have said or not said that would have kept you in there longer?"

Hogan-Trinh: "Had I told them I was a danger to myself and others, they would have kept me."

Hogan-Trinh: "Not once did I meet any individual who had been in the same situation as me to try to help me navigate. If I had someone like that to talk to, I probably would have not necessarily had to go back to the hospital later that day."

Brean: "So how do we get that solution into the system?"

Hogan-Trinh: "We have to do a systems change. I mean we’re talking about overhauling the way we think about and treat people with psychiatric crises and understand that they’re not necessarily going to open up to someone who had letters after their name. They want necessarily more to talk to someone who has been in their situation and has gotten through it."

Brean: "And that’s not happening?"

Hogan-Trinh: "It is not. Not to the extent that it needs to."

Remember, Prude asked to leave. State law says the hospital had to let him go.

Brean: "So how does a hospital get around that?"

Hogan-Trinh: "So, that’s very true. Unless a court has determined that the doctors can take over medical decisions for an individual, if a person wants to leave a hospital, and it doesn’t matter for whatever reason, you can be going in there because you were hit by a car, and if you say, I’m leaving, they cannot legally stop you."

When I asked URMC what changes were instituted after Prude’s death last spring, URMC says it has added a credentialed alcohol and substance abuse counselor as an embedded part of the CPEP team. Although, URMC says plans for that position started before the Prude incident. For the patient, the counselor’s help is voluntary.

When he was discharged, Prude was sent back to his brother’s house in a cab. Strong Hospital paid the fare.

Another review is being done by Dr. Altha Stewart of the American Psychiatric Association (APA). Stewart is looking into whether Prude’s care was affected by his race. I contacted the APA and was told Stewart "had no comment at this time."