ALBANY, N.Y. (WHEC) — As staffing shortages hit hospitals across New York State, the state is giving a boost to nursing students in a move it hopes to give a future boost to staff.

Gov. Kathy Hochul Thursday announced the state is launching the Nurses For Our Future Scholarship, which will cover tuition for 1,000 new healthcare workers to become Registered Nurses.

According to Hochul, the program will allow workers to complete their programs with a flexible schedule, as it offers both part-time and full-time opportunities. 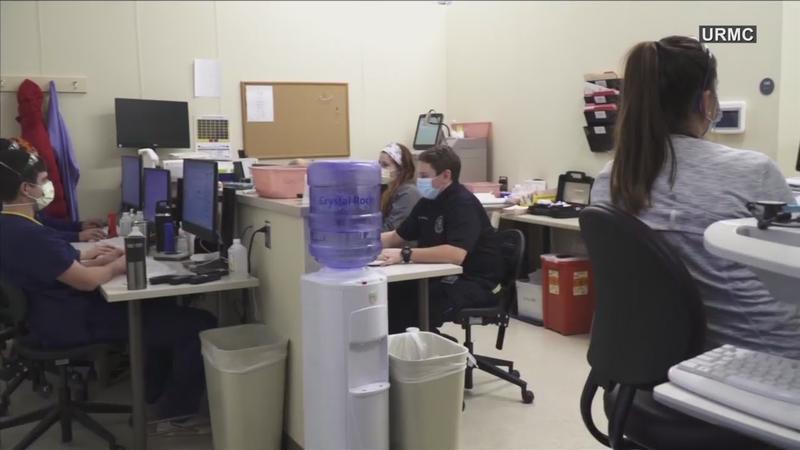 For months, News10NBC has been reporting on major staffing shortages that are crippling our entire local healthcare system. Thursday’s announcement comes days after News10NBC Investigative Reporter Jennifer Lewke pushed Hochul on what, if anything, the state was doing to help.

Hospitalizations in our region are up too, adding more stress on a system that’s already near crisis.

Here’s an excerpt from what Hochul told Lewke

"I would be happy to hear who they are because we have a war room set up to respond to areas where there’s high need. We also know that many of them could go into their surge staffing levels some choose not to it’s more expensive. […] I have everything from 1,000 student nurses who are ready to be deployed like this (snaps fingers) if it gets dire, we have the National Guard, we have EMTs who are willing to assist. So we have resources but the first question we ask is have you done everything you possibly can to avoid this because it’s a collaborative approach that we’re taking as well. We’re very conscious of this, we’re conscious of this."

Lewke sent the governor’s office a number of her stories about the staffing shortages across our healthcare system following the press conference as the governor requested and got the following statement from a spokesman:

Lewke again sent questions to the state Thursday, as she asked questions ranging from how quickly the program will be available, how it will be offered, and will the program also be covered by the state’s existing Excelsior Scholarship.

The Q&A can be found below:

News10NBC Investigative Reporter Jennifer Lewke: How quickly will it be available and will facilities refer possible students or will there be a public way to sign up/be considered?

NY Spokesperson: There will be several ways for New Yorkers to participate in the program. Any New York resident can participate, not just citizens, they just must be accepted into a SUNY or CUNY nursing program and then will do 2 years’ service in NYS Health Care Facility following graduation. They will also have a part-time option if they are working concurrently in a related health facility while they earn their degree. There may also be a lottery for applicants.

LEWKE: Since most of the folks who would be eligible for this program would probably also qualify for the Excelsior program, I assume it’s an either/or? Is there anything the Nursing scholarship would offer that isn’t covered by the Excelsior scholarship?

SPOKESPERSON: Both scholarships are last-dollar scholarships. The Nurses for Our Future Scholarship is aimed at bolstering New York’s healthcare staff, it specifically addresses the shortage in healthcare and lack of workers in hospitals around the state. The scholarship program is designed to recruit and re-train nursing and health care professionals to serve in NYSRNs which are most in need. Some scholarships, like Excelsior, require full-time and this will have a part-time component.


The state did say as part of the program, the state’s Department of Labor will market this new opportunity to people who are either current employees or are unemployed.