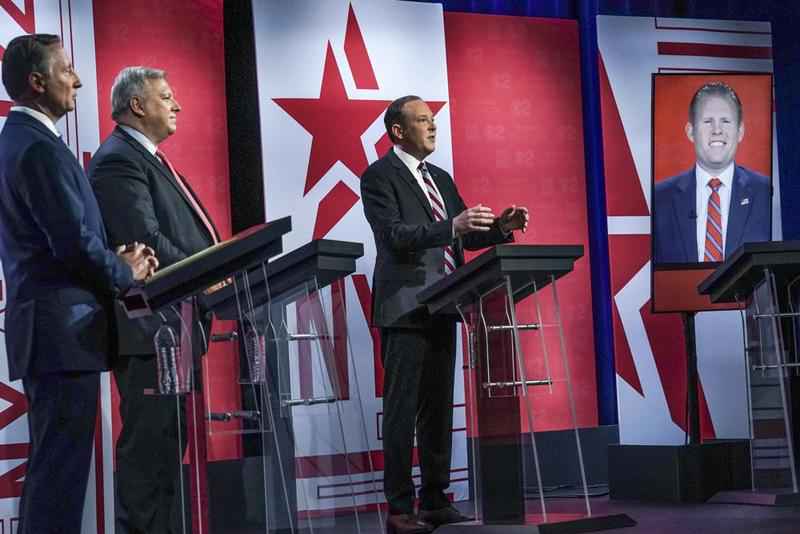 ALBANY, N.Y. (AP) — Four Republican candidates for New York governor faced off Monday in their first televised debate, trying to bruise each other — and Democrats — with two weeks to go until the state’s primary election.

Some of the sharpest exchanges of the night came between U.S. Rep. Lee Zeldin and businessman Harry Wilson, who has said he didn’t vote for Donald Trump in 2020.

Zeldin repeatedly assailed Wilson as a “Never Trumper” and a “Republican in name only.” The businessman responded by dismissing Zeldin as a “failed politician,” and claimed that in January, Zeldin had asked him to be his running mate.

“Why is he dishonestly attacking me now? Because his campaign is disintegrating,” Wilson said.

“Don’t lie,” said Wilson, who claimed to have notes from the conversation.

Giuliani, a former adviser to Trump, appeared in a separate television studio than the other candidates because he was barred from being on the same stage after refusing to submit proof he’s been vaccinated against COVID-19.

Giuliani said if elected, he will restore the jobs of public workers fired for not getting the vaccine. He pledged Monday to empower the police and called for a return of the “stop and frisk” policing tactic in New York City, which was scaled back by police after a judge found it had violated the civil rights of many law-abiding Black people.

Astorino, a former radio industry professional and two-term Westchester County executive from 2010 to 2017, is running for governor for a second time. He’s promised to release an agenda to address New York’s steep job loss stemming from the COVID-19 pandemic, as well as address government corruption and the state’s high taxes and cost of living.

During the debate, each candidate was asked whether they thought Trump should run for president again, and what they thought of the ongoing Congressional hearings into the assault on the U.S. Capitol on Jan. 6, 2021.

Astorino said Trump “bears some responsibility” in the insurrection but said it’s time for the country to move on.

Giuliani praised Trump as a “great president” and pledged to do for New York what Trump did for the country.

Zeldin, a Trump ally and an Army veteran who has represented New York’s 1st Congressional District since 2015, touted his support from the National Rifle Association and said he wanted to repeal a 2013 state gun control law that broadened the definition of assault weapons and required universal background checks.

Wilson, of Johnstown, entered the race this spring by launching a $12 million television advertisement campaign.

The New York Primary Election will take place on June 28, with early voting from June 18 through June 26. Here are some important deadlines to keep in mind for voting and registering.