ROCHESTER, N.Y. (WHEC) — Late Monday afternoon, Republicans in the New York State Senate tried a maneuver to end the rule that says students and teachers have to wear a mask.

Republicans are outnumbered in the senate and the effort failed, but it’s the first time we can recall this kind of attempt happening since the start of school.

There was an education bill on the calendar Monday. The Republicans tried to get an amendment attached to that bill would have repealed the mask mandate.

Happening now: The state senate is going through "non controversial" bills now. The amendment to end the school mask mandate will come up connected to bill 1100A. I’m watching. https://t.co/FMH5D7d3bO @news10nbc

It was Senator Mike Martucci who made the pitch for the repeal.

"The amendment I’m bringing to the floor today would repeal the mask mandate for schools and daycares imposed by the Hochul administration and would leave the decision where to require masks where it belongs — in the hands of the school districts, the private schools, daycares and most importantly the parents," Sen. Martucci said.

Here’s what happened when there was a vote on repealing the state’s mask mandate in schools late this afternoon: "The amendment I’m bringing to the floor today would repeal the mask mandate for schools and daycares…" @news10nbc @ 6 pic.twitter.com/TVuMrn2vgX

Despite unanimous Republican votes, the amendment failed 43 to 20. 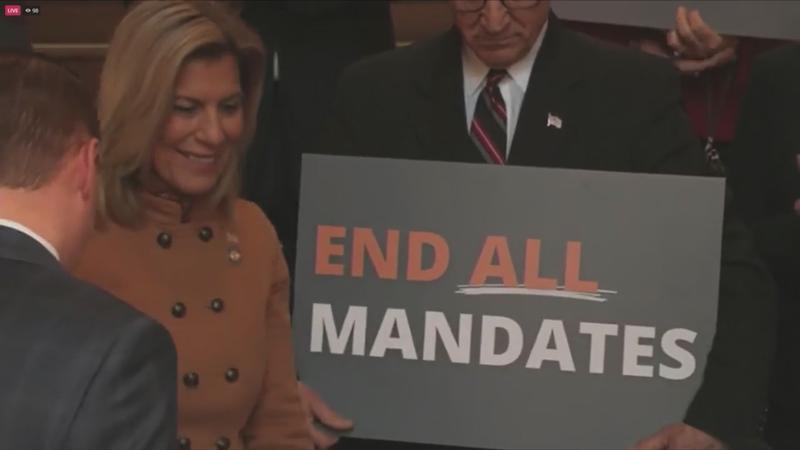 When she ended her mask mandate for public places last week, Gov. Kathy Hochul said schools are different because children are close together for long periods of time, but a target date to end the mandate is March 7, a week after school break.

"That is a very strong possibility," Hochul said last week.

Bo Wright is the superintendent of Rush-Henrietta schools and the president of the Monroe County Council of School Superintendents.

Brean: "If the state decides to end the mask mandate in schools, do you think that will make a difference in the day-to-day learning environment in the school?"

Wright: "I think there’s definitely a want on the part of students and parents I think to transition to a more normal school environment."

Brean: "If you had a chance to talk to the governor, say today you sat across the table from the governor, what would you tell her about ending the mask mandate and what it’s like to be a principal, superintendent, faculty member and student in a school today?"

Wright: "I give a lot of credit to the governor and her administration because we are in talks with the governor and her team so I do think she’s well versed about what’s happening here on the ground. I’ve said from the beginning I think it’s important we have clear concise guidance that’s consistent coming from the state level. And I also think it’s important that we have some clear timelines around when these changes are going to happen."

Last week, the New York State Council of School Superintendents told her schools are starting to see cracks in parents that had traditionally accepted all the COVID rules.

Circle March 7. Kids come back from break, they test twice, the state looks at positive cases and then makes a decision on the mask mandate.