OGDEN, N.Y. (WHEC) — Police in both Webster and Ogden are actively searching for several stolen vehicles that were taken from two auto repair shops located about 25 miles apart. The incidents happened overnight, and a total of 8 vehicles were stolen.

So far Ogden say they arrested 18-year-old Amarieon Maybell, a resident of Rochester. Five of the stolen vehicles have been recovered as well.

The suspected car thieves police are searching for allegedly stole 3 vehicles from Willmes Tire and Auto Service located on Ridge Road in Webster just before 3 a.m. One of those vehicles, a grey minivan was then driven to Resch Auto in Ogden.

Ogden police recovered 1 of 5 vehicles stolen earlier this morning from Resch Auto. Another vehicle is reported to be involved in an accident. Both vehicles were recovered in Rochester. pic.twitter.com/GnXBDbLwb6

This minivan was stolen from a car repair shop in Webster. It was driven to and left behind at Resch Auto in Ogden. 5 other vehicles were stolen from Resch, according to owner Andy Resch. pic.twitter.com/9UDR4ZnLnd

Owner Andy Resch says according to his surveillance cameras a group of men inside arrived just before 4 a.m.

"They pulled in a van, and swept through the back of the parking lot, and ended up parked right there. They got out of the van, smashed the front door with a chunk of concrete," Resch said.

He went on to say once inside they stole several sets of keys. 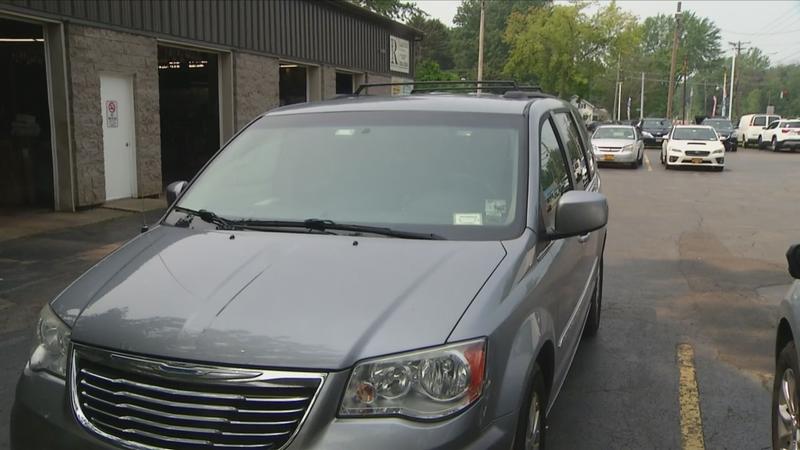 "The video shows them pushing fobs, and looking around. I’m sure you know the gesture, and found five cars, and took off," Resch said.

Rochester Police were able to recover two of the stolen vehicles. An SUV was brought back to the Ogden Police Department and released to its owner after being processed. Its On-Star equipment helped in the recovery. The owner declined our request for an interview other than saying he’s happy to get it back. The other car was involved in a crash and totaled.

"We often see that vehicles stolen like this in a burglary will be used for crimes elsewhere in the area. So we’re trying to work as quickly as we can to recover them before they’re used in crimes," said Ogden Police Chief Christopher Mears.

The only person arrested so far, Amarieon Maybell has been charged with third degree burglary, and criminal possession of stolen property in the fifth degree. Mears says he was released with an appearance ticket as the investigation continues.

"We did recover video from Resch auto, and we’re checking the video from the surrounding businesses to see if we can get more information from those," Mears said.

Resch tells us that he’s still missing keys to 13 different vehicles that are still on his lot. If you have any information on these burglaries, police say you can always contact them by calling 911.

Maybell was released on an appearance ticket and will appear in court at a later date.

Pictures of the break in at Resch Auto in Ogden. pic.twitter.com/DEBKEuFpJR

The Ogden Police Department confirmed one of its investigators was out with another one of the stolen vehicles just after 5 p.m.

One of our investigators is out with it now. https://t.co/AJMkBSFnHG