BRISTOL, N.Y. (WHEC) — Two people from Rochester are facing weapons charges after leading deputies on a chase that ended with a crash.

According to the Ontario County Sheriff’s Office, deputies responded to a call for a burglary on Johnson Hill Road in Bristol. When they arrived, a red pickup truck that matched the description given by the caller fled the scene.

That truck led deputies on a chase that took them through the town of East Bloomfield. The suspects cut through a soybean field. Deputies say the driver did extensive damage to the field and blew out a tire.

The truck eventually made its way onto Route 96 before crashing into the Railside Market parking lot in Victor.

During the chase, a K9 member of the sheriff’s office was injured. The dog was taken to a vet and has been released. 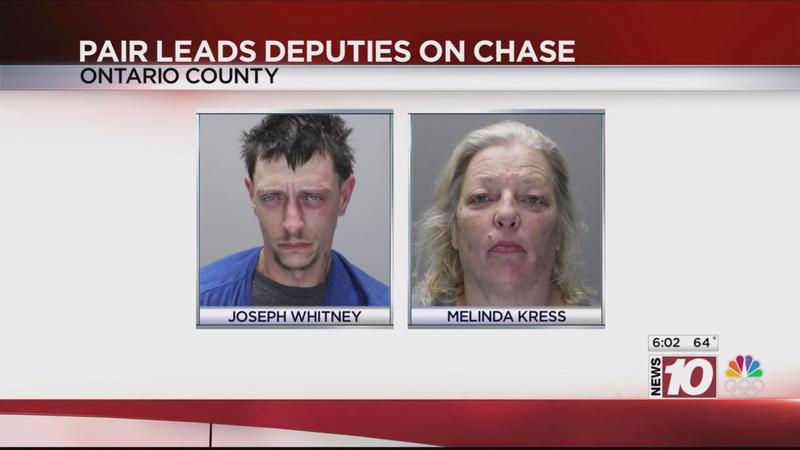 Joseph Whitney, 41, and Melinda Kress, 57, were taken into custody. Deputies searched the truck after the chase and found stolen guns and tools. Whitney is a suspect in several burglaries across Ontario County where guns were taken. News10NBC learned that Whitney is from Irondequoit and Kress is from Greece.

Both suspects have been taken to the Ontario County Jail. More charges are expected in addition to Criminal Possession of a Weapon.