Parole absconder in custody after chase, crash on Genesee Street

ROCHESTER, N.Y. (WHEC) — A parole absconder is in custody after leading police on a chase then crashing on the city’s southwest side.

The U.S. Marshals Task Force, Monroe County Sheriff’s deputies, Rochester Police officers, and crews with the Rochester Fire Department responded to the corner of Genesee and Sawyer streets at around 7:30 p.m. Friday.

U.S. Marshal Charles Salina says law enforcement spotted the parole absconder, Charles Donte Terrell Holley, 31, of Rochester, in the area and a vehicle chase ensued. The suspect then crashed at the corner of Genesee and Sawyer streets, causing his vehicle to catch fire. He then fled the scene on foot, but police soon caught up with him. He dropped a gun, and police took him into custody, according to Salina. U.S. Marshals also recovered a bulletproof vest from the scene.

Holley was wanted on a parole violation warrant from a 2015 Robbery 2nd conviction, where the U.S. Marshals say he and others stole property from Home Depot and assaulted a security officer who attempted to stop them.

Holley is facing additional local charges for a felon in possession of a weapon from Friday night’s arrest. 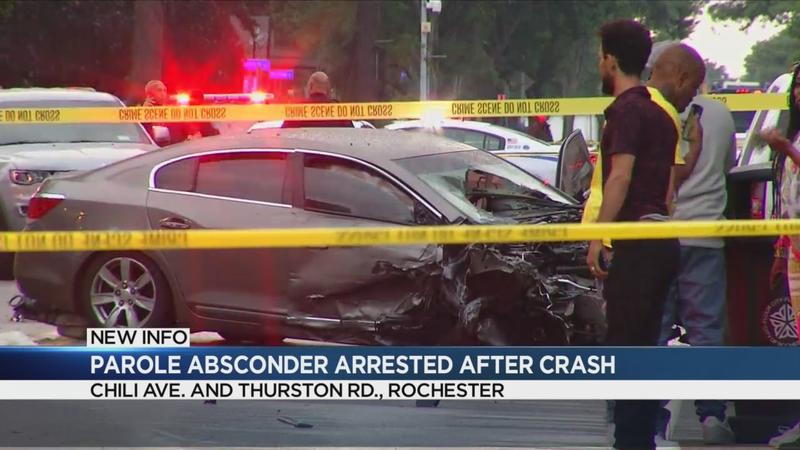 Six cars were involved in the crash. No one was seriously injured.

Genesee and Sawyer streets are closed due to the investigation and cleanup efforts.